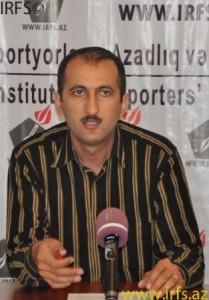 Correspondent of Bizim Yol newspaper Idrak Abbasov, who several months ago reported an attack to the Lerik district police office, was invited to the local prosecutor’s office to give a statement about the incident on August 25. According to the journalist, he was questioned by investigator Abdulla Abdullayev.

“I gave a written statement regarding Lerik city mayor Atamali Najafov’s assault on me on June 12 and 14. The investigator said the reason for the delayed investigation was that he had been on leave. Upon consulting my lawyer Khalid Bagirov, I told the investigator that I want to add Najafov’s threatening phone call (dated July 14) to my statement. The investigator told me that Najafov’s action does not constitute crime as I bear no sign of damage.  But it does create criminal liability, because what Najafov told me during his phone call on July 14, included not only insults to me and my family, but also terrorist threats as well. Therefore we are going to try all the possibilities presented by the legislation to get him prosecuted. Now we are discussing with Khalid Bagirov what future steps should we take with regard to this case. Meanwhile, we are waiting for the results of the investigation”, said the journalist.

Journalist Idrak Abbasov was attacked and indecently insulted by Atamali Najafov, the head of the Lerik city administrative-territorial unit, where Abbasov had gone to get a certificate. The journalist made a complaint to Lerik District Police Office regarding the incident. According to the journalist, Najafov later phoned him and threatened him and his family with death.