JOURNALIST CLAIMS HE WAS HELD AT POLICE FOR 7 HOURS ILLEGALLY 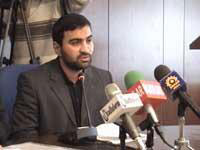 On 2 January, “Bizim Azerbaijan” newspaper correspondent Ramin Bayramov was detained by the employees of the Yasamal District Police Department Police Unit #27 during an action conducted by religious people in front of Israeli Embassy to Azerbaijan in connection with Gaza incidents.
R.Bayramov was taken to Baku Head Police Department’s Temporary Administrative Detention Center along with other detained action participants. R.Bayramov told this to the Institute for Reporters’ Freedom and Safety today, 6 January.
“The police detained me along with action participants,” said R.Bayramov. “Although I introduced my journalist card, a civil clothed person ordered the police, ‘Take him too, and investigate.’ I presented my journalist card several times at the Temporary Administrative Detention Center located in Khatai district; however, I was being held there for seven hours.”
Internal Affairs Ministry’s Public Relations Department Head Ehsan Zahidov told IRFS that they haven’t received such information.
Previous Post