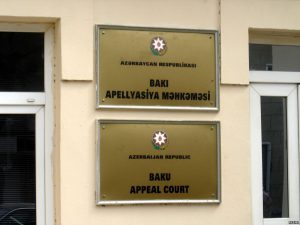 Baku Court of Appeal, chaired by Judge Faig Gasimov, considered Afgan Mukhtarli’s appeal against the decision on his arrest. Journalists were not given access to the courtroom, as the hearing was held behind closed doors. The court did not grant the journalist’s appeal. According to lawyer Elchin Sadigov, doctors tested Mukhtarli’s blood sugar in Baku Detention Centre, where he is held, and diagnosed a very high and dangerous level of blood sugar. “The cardiologist has prescribed a medicine for him, but the Detention Centre leadership has not given the medications to him,” the lawyer said.

Background: Afgan Mukhtarli was detained on 29 May. He himself maintains that he has been forcibly brought to Azerbaijan from Georgia. Meanwhile, government representatives deny his account, accusing Mukhtarli of trespassing the state border. He is charged under Articles 318.1 and 206.1, crossing the border in an illegal way and smuggling. The journalist is also charged with resistance or use of violence against a government representative, under Article 315.2 of the Criminal Code. He has been remanded for three months.