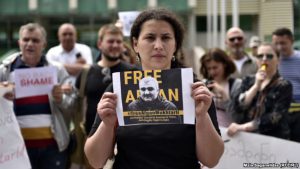 The criminal case against Afgan Mukhtarli has been merged with the criminal case launched in relation to Meydan TV, lawyer Elchin Sadigov said. According to him, a joint investigation team has been created and additional people have been involved. “We lodged a motion at the investigating authority to take statements from and interrogate MP Elman Nasirov and the Jarchi TV program anchor about the source of the information they had provided to the public on a special operation conducted to abduct Afgan Muktarli in Georgia and bring him to Azerbaijan. Our motion was granted, and these persons will be questioned,” Sadigov said.
Previous Post