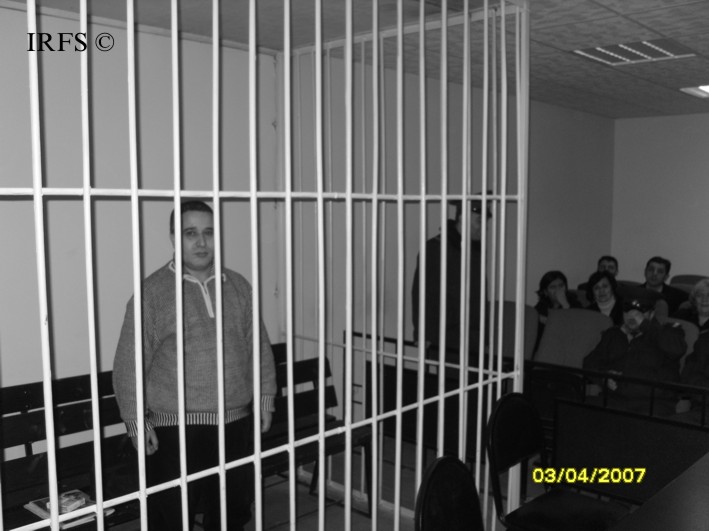 Journalist Faramaz Allahverdiyev’s health is deteriorating in jail, reported the journalist’s wife Tahire Allahverdiyeva at a press conference in IRFS Media Center, on December 3rd. Faramaz suffers bowel problems, low blood pressure and a severe migraine.
According to the journalist’s spouse, her family's financial problems are so severe that they cannot afford to take food for Faramaz or pay the 6 month’s rental for the apartment they live in. The wife of the journalist had worked as a saleswoman before, but two months ago she was fired and is still unemployed. Yet she has to maintain herself and her two children.

In fact, the arrest and subsequent conviction of Faramaz Allahverdiyev were politically motivated, believes his brother Qurban Allahverdiyev. According to Qurban Allahverdiyev, earlier this year Faramaz wrote two investigative articles and posted them on social networking websites. One of the articles dealt with oil and the other with pine tree business. In his articles, Faramaz suggested that both of the businesses are related to the relatives of the president’s spouse. This is the main reason behind the arrest of Faramaz Allahverdiyev and his subsequent condemnation, said the brother.
Faramaz Allahverdiyev was sentenced to 4.5 years in jail under Article 220.2 (Appeals to mass disorders and violence against citizens) and 318.1 (Crossing protected frontiers of the Azerbaijan Republic without established documents or outside of check point of frontier). It is alleged that in 2011 ahead of March 11 Great People’s Day (a Facebook event) Faramaz Allahverdiyev, under the nickname of Elchin Ilgaroglu, called upon people to riot, promising to burn himself during the action. He had also allegedly crossed the Azerbaijani-Turkish border and lived there illegally from November 2010 until October 2011. Besides the prison sentence, Allahverdiyev is required to pay 1350 AZN fine imposed on him by November 5, 2010 decision of the Narimanov District Court and 70 AZN in compensation for the expenses of forensic medical exam carried out during the last trial. Faramaz will serve his jail sentence in a “strict regime” prison.
The journalist’s appeal against the previous decision was denied in November, 2012. This time the journalist filed a cassation appeal, which is to be considered within a month.