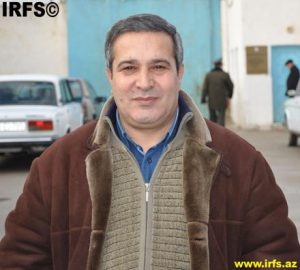 Journalist Faramaz Novruzoglu (Allahverdiyev) is staging hunger strike in the Baku Investigative Prison #1, where he is being held, his lawyer Fariz Namazli told the Institute for Reporters’ Freedom and Safety (IRFS) on March 7, after a meeting with the journalist. Namazli said the journalist has been on hunger strike for now three days, without significant health problems.

Novruzoglu stitched up his mouth on March 4 and launched hunger strike, in protest to the Supreme Court, which denied the journalist’s request to participate in his own trial and see his case file documents.

Background: Faramaz Allahverdiyev was sentenced to 4.5 years in jail under Article 220.2 (Appeals to mass disorders and violence against citizens) and 318.1 (Crossing protected frontiers of the Azerbaijan Republic without established documents or outside of check point of frontier). It is alleged that in 2011 ahead of March 11 Great People’s Day (a Facebook event) Faramaz Allahverdiyev, under the nickname of Elchin Ilgaroglu, called upon people to riot, promising to burn himself during the action. It is also alleged that he had illegally crossed the Azerbaijani-Turkish border and lived there from November 2010 until October2011. Besides the prison sentence, Allahverdiyev is required to pay 1350 AZN fine imposed on him by November 5, 2010 decision of the Narimanov District Court and 70 AZN in compensation for the expenses of forensic medical exam carried out during the last trial. Faramaz will serve his jail sentence in a “strict regime” prison.