JOURNALIST FIKRET FARAMAZOGLU SAYS HE MAY BE ARRESTED 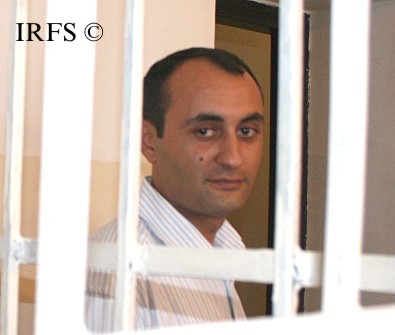 Aladdain Rusatamov, the author of a relevant article that was published in "Elchi" newspaper, participated in the hearing as a witness. He testified that he wrote his article after he talked to Baku Head Police Department employee whose name is Khanlar and received information for the article from him.
Faramazoglu told the Institute for Reporters' Freedom and Safety that he has doubts about a police order to arrest him, "I conducted some investigation and came to a realization that this article and this campaign against me is being carried out by the police. During the last hearing, my belief was confirmed by the thoughts of Aladdin Rustamov. This proves that my arrest and ordered articles about me are being set up by the same source."
Recall that "Elchi" Newspaper Chief Editor Ali Haziguliyev filed two lawsuits against former "24 Saat" Newspaper Chief Editor Fikret Faramezoglu. The lawsuits stem from the article "Honor Lesson for Dishonorable" that was run in "24 Saat" Newspaper on 4 February. Faramezoglu is accused under articles 147 and 148 of Criminal Code and his arrest is requested in one of the lawsuits. In the other lawsuit the plaintiff is seeking the institution of a 100,000 AZN fine against Faramazoglu.