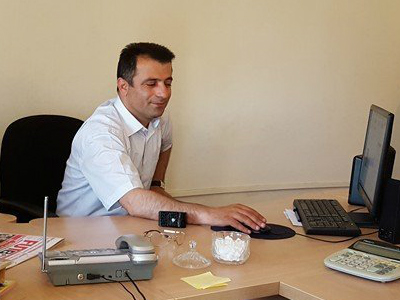 On 1 March, Ikram Rafig oglu Rahimov, the head of realliq.graveaz website who had been sentenced to one year in prison under Article 147.2 (libel, involving an accusation of a grave or particularly severe crime) of the Criminal Code, was released in the courtroom during his appeal hearing in Sumgayit Court of Appeal, journalist’s lawyer Elchin Sadigov has said. The court also released the reporter’s co-defendant and the source of his article Rahman Novruzov.

The appeal was seeking the acquittal of the two. The court partially granted the motion, mitigating their sentences to 9 months of corrective labour. Deemed to have served out their sentences, Rahimov and Novruzov were released in the courtroom.

Elchin Sadigov noted that they disagreed with the decision, as they had been expecting a verdict of acquittal from the court. Thus, the lawyer intends to appeal the decision to the Supreme Court.

Recall that, under its judgment dated 25 November 2016, Sumgayit City Court handed one-year jail sentences for libel to director general of realliq.info website Ikram Rafig oglu Rahimov, and Novruzov Rahman Salman oglu, who after state agencies’ failure to properly investigate his complaints against illegalities of officials appealed to the journalist and made the matter public. The writer had claimed that he had been subjected to torture at Sumgayit police department during his arrest.

Background: Realliq.info website editor-in-chief Ikram Rahimov was arrested on the basis of a private prosecution brought by Vugar Galandarov, the head of Ucuz Market (Inexpensive Market) shopping centre based in Sumgayit city, after publishing former Ucuz Market accountant Rahman Novruzov’s report about shopping centre head Vugar Galandarov giving bribe to head of Sumgayit city executive power Zakir Farajov. On 25 November 2016, Sumgayit City Court convicted both Ikram Rahimov and Rahman Novruzov under Article 147.2 (libel, by accusing someone of a serious crime) of the Criminal Code and sentenced each of them to one year in jail.

The journalist maintains that he was tortured while being detained in police custody.