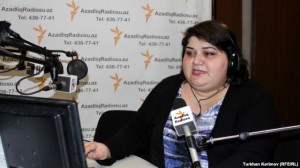 Journalist Khadija Ismayilova was detained at Baku airport in the early hours on September 5, upon arrival in Baku from Tbilisi. The Institute for Reporters’ Freedom and Safety (IRFS) was informed about it by the journalist herself.

According to Ismayilova, she was first detained by border guards, and then handed over to customs officers.

“They took me to the exit of the airport, and inspected my personal items and bank cards. They took away all my personal items, bank cards and cash. They even opened and examined the bandage applied to my leg which I injured during the visit,” the journalist said.

Khadija Ismayilova was released after about two-hour detention at Baku airport.