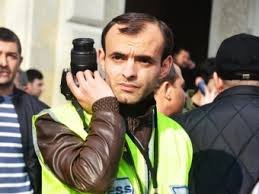 Elman Rahimov, the presiding judge at Sabail District Court, held a hearing on the criminal case against the football player Javid Huseynov, who is being prosecuted in connection with the death of journalist Rasim Aliyev. Huseynov stands charged under articles 307.1 (failure to inform [the authorities] about a serious crime, despite of being aware of its preparation or enactment) and 307.2 (concealment of a serious crime without a prior consent) of the Criminal Code. Five men, including a relative of Javid Huseynov were sentenced in relation to the murder case. On April 1, 2016, the Baku Grave Crimes Court sentenced Elshan Ismayilov to 13 years, Arif Aliyev to 12.5 years, Jamal Mammadov to 11 years, Kanan Madatov to 9 years, and Samir Mustafayev to 9 years in jail.

At today’s hearing, prosecution witness Aydin Mahmudov was questioned. Previously, on April 27, 2016, the court read out the statement that Aydin Mahmudov had provided to the investigating agency with the consent of the prosecution and defense, due to the witness’ failure to attend court. However, at the hearing held on May 4, 2016, Javid Huseynov’s lawyer argued for the importance of questioning Aydin Mahmudov in court. He filed a motion to bring him to court, which was granted.

Aydin Mahmudov is a friend of the late journalist Rasim Aliyev’s, and was at his bedside in the hospital. During his court testimony, Aydin Mahmudov said while he was with Rasim Aliyev, footballer Javid Huseynov and Gabala Football Club manager Sabuhi Safiyarli visited Rasim Aliyev. “At the hospital, Javid Huseynov said to Rasim, “We talked on the phone and ironed out our misunderstandings – why did you go to the meeting?” Rasim responded, “How come 5 minutes after my phone conversation with you, your cousin phoned me and invited me to this meeting?” Javid answered that he was unaware of that meeting. Rasim told Javid that 5 men had beaten him and had taken his phone and wallet.

“I also talked to Gabala FC manager Sabuhi Safiyarli about it. He gave me his number and said that he would check into it in an hour or two and get back to us regarding the phone and wallet. But he did not phone and Rasim advised me not to go to the meeting with Sabuhi as I could be beaten, too,” Aydin Mahmudov said.

Mahmudov added that Rasim Aliyev did not believe that Javid Huseynov was unaware of the plans to assault him. “Rasim didn’t understand how Javid Huseynov could have been unaware that his cousin, Elshan Ismayilov (one of the accused) called him just 5 minutes after his phone conversation with Javid, to propose a meeting. Javid Huseynov also asked the doctor about Rasim’s condition. Javid Huseynov told Rasim that if indeed his relatives were the assailants, they would cover all of his expenses,” Aydin Mahmudov stated during his testimony.

Upon completion of the witness interrogation, the presiding judge announced that the judicial investigation would also be concluded.

Javid Huseynov’s lawyer Adam Mammadov requested additional time to prepare for the defense speech; his request was granted by the judge .