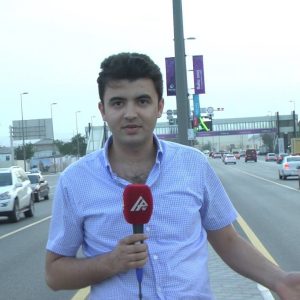 Farahim Ilgaroglu, an exiled journalist, currently living in Germany, has sued his former employer APA Holding media organisation once again, the journalist himself reported on 21 February.

Ilgaroglu put the blame for the court dispute’s failure so far on lawyer Khalid Aghaliyev and noted that he had signed contracts with two new lawyers. “They have put the judicial and legal systems of our country into such a terrible condition that it will be difficult for me to sue Emergency Minister Kamaladdin Heydarov’s holding and demand my rights,” the journalist said, noting that two court hearings have already been held on the case.

“The case is being heard by Khatai District Court. According to what my lawyers have told me, the opposite party has claimed in court that I had been warned about my dismissal one month earlier. This is ridiculous. The signature and handwriting on that application are not mine. The application has been forged on the instruction of Vusala Mahirgizi, head of APA Holding. Three days before my dismissal, I received instructions from Vusala Mahirgizi regarding PR work. Also, on the same date, I was on duty for APA TV, which is part of the Holding, and I took part in filming. Of course, we will present all these facts to the court,” the journalist said.

Ilgaroglu added that Mahirgizi was trying to ‘shrink the scope’ of the matter, but won’t succeed. “Seems like, Mahirgizi had forgotten her phone conversation with me when she told me that she fired me because the Presidential Administration said to, so she won’t be able to protect me, that she feared the leader of an opposition party, and that my posts relating to opposition put her at risk. The conversation was recorded because I was behind the wheel when talking to Ms Mahirgizi,” Ilgaroglu said.

Background: Journalist Farahim Ilgaroglu was sacked after sharing his views and posting photos on Facebook about the protest rally held by the National Council on 11 September 2016. Authoritative international organisations such as European Federation of Journalists (EFJ), IDEX, ARTICLE 19, Reporters without Borders, International Press Institute (IPI), Association of European Journalists (AEJ), and Committee to Protect Journalists (CPJ) released a joint statement and criticised the Azerbaijani authorities for the politically-motivated dismissal of Farahim Ilgaroglu.