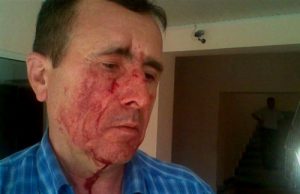 Shirvan Court of Appeal, under the chairmanship of judge Kamil Bashirov, held a hearing on the case of freelance journalist Mahbub Zulfugarli.

A group of Imishli residents came to the court of appeal and wanted to confirm in the court that what Mahbub Zulfugarli had written about the letter of 461 people were true. But the judge did not listen to them. During the hearing, the judge invited Zulfugarli to reconcile with the plaintiff, but the journalist declined this offer. The judge also asked a question to the journalist in the course of the proceeding.
“You are saying that Saleh Samadov is a corrupt official. How do you know he is corrupt,” the judge asked. However, Mahbub Zulfugarli did not have enough time to answer the judge’s question. The judge postponed the hearing until 13 October.

Background: Mahbub Zulfugarli has been arrested under Article 147.1 of the Criminal Code, on the basis of a lawsuit filed by Saleh Samadov, a department chief of the State Committee for Standardization, Metrology, and Patent.
Note that, several months ago, the journalist wrote a letter to First Vice-President Mehriban Aliyeva and was arrested afterwards. In the letter, the journalist spoke about the actions of Saleh Samadov. In particular, he wrote that Samadov was behind the mass felling of trees in the region’s park and his alcohol-cognac plant emitted fetid odor to its surroundings and created environmental problems, because of which 461 residents of the region had appealed to the relevant authorities. In his appeal, the journalist noted that he was being subjected to insults and threats by Samadov and his relatives and underlined the importance of putting an end to the high-handedness and illegalities reigning in Imishli.