Journalist Beaten Up by Police 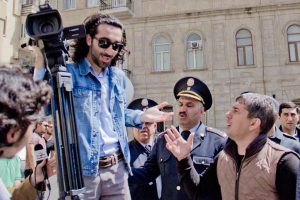 Journalist Islam Shikhali was detained by the local police while covering an Ashura ceremony (commemoration of the death of Shia imam Husayn ibn Ali) in Lankaran region. According to the journalist, he was subjected to pressure.
“I was filming the Ashura ceremony in the Great Bazaar Mosque in Lankaran. Suddenly, a police major and three sergeants approached and interrupted filming. I said I am a journalist. After that, the chief of the local police department ordered that I be taken to the police department. When we arrived in the police department, one of the sergeants inflicted a couple of blows on my chest. In the department, the chief threatened me by saying ‘what are you doing here’ using offensive language. They searched my phone. At night, they instructed one of the local taxis to take me to Baku without allowing me to leave the car. Early morning, we arrived in the capital city. I am going to file complaints with the relevant authorities over this all,” the journalist said.