Journalists celebrate the Day of Solidarity of Journalists 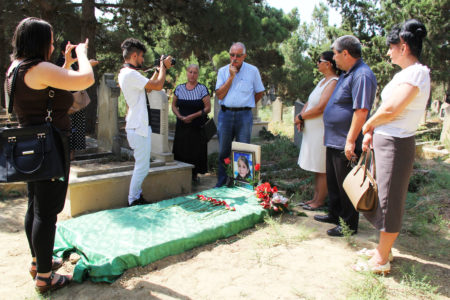 On the International Day of Solidarity of Journalists public figures gathered at the grave of Firangiz Huseynova, the mother of the executive director of the Institute of Reporters Freedom and Safety (IRFS)s Emin Huseynov, who lives in political emigration and the chairman of the organization, blogger Mehman Huseynov, who was arrested last year.

Firangiz Huseynova died a month ago in the hospital under unclear circumstances.Director of the Turan news agency, speaking at the event, noted that journalists usually gathered at the grave of Elmar Huseynov, the editor-in-chief of “Monitor” magazine: “This time we decided to come to the grave of Firangiz-xanum. Because she actually became a victim in the way of freedom of speech. One of her sons – Emin Huseynov was forced to leave the country, the younger son – Mehman was arrested. Firangiz-xanum suffered greatly from this, however she did not try to force them to turn off their chosen path. Unfortunately, on July 15 she fell ill, got into resuscitation, and died on August 6. The Azerbaijani authorities showed cruelty and did not allow Mehman to visit his sick mother. “Mehman Aliyev noted that Emin and Mehman Huseynovs suspected guilty the authorities of the death of their mother: “They say that this is a murder. To date, no document has been submitted to the family on the causes of the death of Firangiz Huseynova. This raises great doubts. In 2000, I lost my mother through the fault of doctors, and a few years later nearly lost my father. We saw the terrible state of our health system in the case of Rasim Aliyev and Rafik Tagi. It’s the same in the death of Firangiz Huseynova. It’s like trying to hush things up. I demand that accurate information be provided in connection with her death. If this is not done, then the authorities are behind this death. I regard it that way. “Aliyev also touched upon the state of media in the country: “Today journalists and bloggers are in prisons, the media is being harassed. Here, at the grave of Firangiz-xanum, we can see the state of the media. There are no media representatives. Media in the country have been destroyed, and this is reality. This policy should be put an end,” M. Aliyev said.Avaz Zeynalli, the editor-in-chief of the newspaper “Khural”, also touched upon the health problem: “There is no health care, which can serve the Azerbaijani people. The wounded Chief Executive of the city of Ganja, Elmar Veliyev, was immediately taken to Israel after the incident. Deputy Prime Minister treats his teeth in Germany. And what should an ordinary people do? Remaining patient unattended is an attempt. In connection with the death of Emin’s and Mehman”s mother, there are suspicions that must be investigated. It is necessary to know whether it was an order or medical negligence. There is a version that the medical documents of Firangiz-xanum should have been provided to independent medical experts for a conclusion about the reasons for her death. Maybe that’s why the relatives are not provided with documents of the deceased. We must draw up an appeal, sign it, and the Ministry of Health must clarify the issue of the death of Firangiz Huseynova,” Zeynalli said.