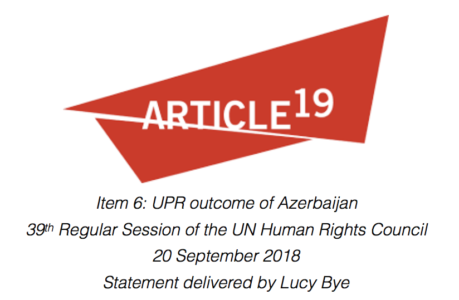 Thank you Mr Vice President,
The adoption of Azerbaijan’s UPR takes place amidst an on-going, and widespread, assault on the right to freedom of expression and other fundamental rights in the country.

That the government has today noted the vast majority of recommendations which aim to protect these rights, gives little hope of the situation improving.
Constitutional amendments approved by referendum in 2016 marked a watershed moment: the weakening of democratic checks and balances and the consolidation of Presidential powers facilitated a renewed crackdown on journalists, activists and political opponents. This further accelerated the severe shrinking of civic space, already weakened by regressive changes to laws governing NGOs and the arrests of several leading human rights defenders and journalists in 2014.
In recent years, the government has equipped itself with an expansive, and expanding, legal toolbox to restrict expression, online and offline. This includes provisions which criminalise ‘smearing or humiliating the honour and dignity’ of the President, and ‘slander or insult’ using ‘fake user names, profiles or accounts’, online. They must be repealed.
When national laws are deliberately used to criminalise dissent, insulate the state from criticism, quell political opposition, and silence journalists and human rights defenders, it is no defence to claim – as the government does – that individuals detained for their exercise of the rights to freedom of expression, peaceful assembly and association have violated the law. Such detentions are arbitrary and violate international human rights law. The revolving door of arrests and imprisonments sends a clear message to Azerbaijani citizens of the consequences of challenging the official line.
More than 120 journalists, human rights defenders, writers, activists and political figures remain imprisoned. We continue to call for the immediate and unconditional release of all those detained politically motivated charges, including Afgan Mukhtarli, Seymur Hazi, Mehman Huseynov, Fuad Gahramanli, Mammad Ibrahim, Rashad Ramazanov, and Tofiq Hasanli. Their convictions must be quashed, and all forms of harassment against them cease, including through the lifting of all restrictions on their freedom of movement.
Physical attacks against journalists and activists continue to be perpetrated in impunity, creating a climate of fear and a culture of self-censorship. We remain deeply concerned by the failure to fully investigate the murder of journalists Rasim Aliyev, Elmar Huseynov and Rafig Tagi, as well as the death by hanging of blogger Mehman Galandarov, on 28 April 2017, in his jail cell. His death was declared a suicide, in the absence of evidence.
We call on the government to investigate all attacks, to bring the perpetrators, whether state or non-state actors, to justice, and to strengthen protection measures for at-risk individuals.
The government claims 5,000 media outlets operate in Azerbaijan. In reality independent media outlets have been actively targeted – forced to close or go into exile – in a further attempt to prevent the dissemination of alternative viewpoints. Those who continue to publish online have had their websites blocked by the authorities on the vague basis that they contain information considered ‘a danger for the state or society’.
The government must end its regulatory and judicial harassment of independent media, and take urgent steps to create an enabling environment for the development of an independent, plural and diverse media landscape.
We call on the Government of Azerbaijan to reconsider its approach, and to accept all recommendations aimed at urgently safeguarding the rights to freedom of expression, assembly and association in the country, and to seek the support of the international community to ensure their prompt and full implementation.

Journalists celebrate the Day of Solidarity of Journalists