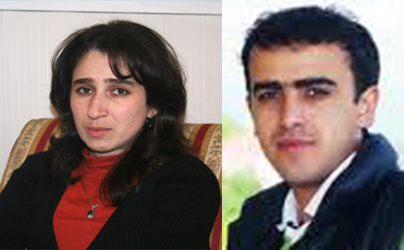 Yesterday, 30 August, journalist Aynur Elgunash and photo-reporter Ahmad Mukhtar faced pressure by police. The Institute for Reporters Freedom and Safety was told this by Aynur Elgunash.
According to Aynur Elgunash, they were subjected to pressure by civil clothed police when they wanted to prepare a report in connection with the action held for International Memory Day for Missing People in front of Baku Office of the International Red Cross Committee.
“Using our mobile phones we wanted to film the action held by relatives of missing people,” said A.Elgunesh. “Civil clothed police wanted to take the phones from us. Although we told the same person that we are journalists and introduced our journalist cards, police hit Ahmad Mukhtar and then pushed me.”
A.Elgunesh emphasized that they reported the incident verbally to the Deputy Chief of Narimanov District Police Department Khanlar Bayramov who came there regarding the pressure by this person who introduced himself as Police Captain Elman .
Photo-reporter Ahmad Mukhtar and A.Elgunash told the Institute for Reporters Freedom and Safety that they will not appeal to Court officially because they did not sustain serious injuries although they faced physical pressure by police.
The Deputy Chief of the Narimanov District Police Department, Khanlar Bayramov told IRFS that there was not any pressure used against the journalists during the action and nobody appealed to him in connection with this matter.
“At the end of the action, a young woman came up to me, said that she was a journalist and asked my name,” said K.Bayramov. “I introduced myself; she did not say anything about harassment. If there was pressure, I would be aware. There was no such case.”
Previous Post