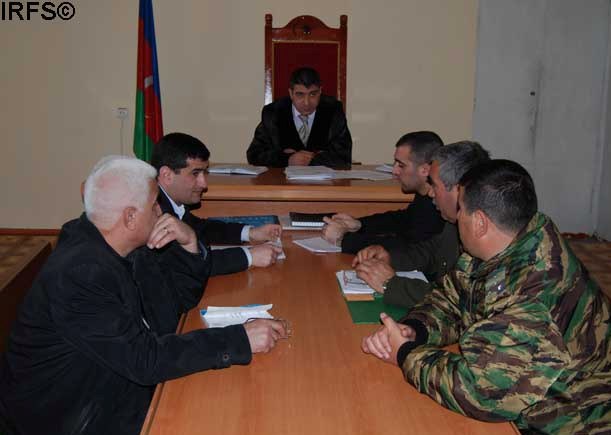 Today, 2 April, in the Sabail District Court, under the chairmanship of Judge Elnur Hasanov, a hearing was held on the lawsuit of "Mukhalifat" Newspaper Editor-in-Chief Rovshan Kabirli and the newspaper's Department Editor Yashar Agazade against the Ministry of Justice, Ministry of Justice's Penitentiary Services and Penitentiary Services' Investigative Detention Center #1 (Bayil Prison) to consider imprisonment conditions unfounded.
During the last hearing, the plaintiff put forth a motion to submit pictures taken before the examination conducted in the Detention Center #1 to the court and the judge fulfilled the motion. However, the defense, representatives of the Detention Center #1, did not introduce those pictures to the court today. Defense representative, inspector of the detention center Sahil Seyidov said that photos have been destroyed as a result of an accident when ink was spilled on the pictures accidentally.
“I took pictures and developed them. Deputy Chief of the Detention Center Agammad Mammadov was supposed to stamp them. I gathered them; however ink was spilled on them accidentally and they were destroyed,” said Mammadov.
Expressing his opinion on this matter, the plaintiff Rovshan Kabirli said that there are controversial issues here and he does not believe that the pictures were destroyed by S. Seyidov.
The plaintiffs put forth a motion today also. In the motion, they asked that the warrant of attorney #17.1 –1233, dated 20 February 2009, submitted to the court by the Penitentiary Services be considered illegal and unfounded, and that Ilgar Ramazanov, who participated as the representative of Penitentiary Services, be considered unreliable. R. Kabirli and Y. Agazade asked the judge to consider evidence and testimoney submitted to the court by I. Ramazanov and his participation in the court as the representative of Penitentiary Services illegal.
Judge E. Hasanov fulfilled the motion and scheduled the next hearing for 7 April at 2:30 p.m.
“Mukhalifat" Newspaper Editor-in-Chief Rovshan Kabirli and the newspaper's department editor Yashar Agazade have been held in the Investigative Detention Center #1 for five months in 2007 due to a lawsuit filed against them by J. Aliyev.