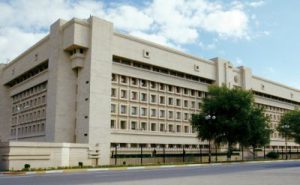 Despite the hearing not being a closed session, journalists were not granted access to the courtroom again. Media representatives were informed about the details of the trial by lawyers alone, which is not sufficient for a comprehensive and objective coverage of the court proceedings.

Speaking to the journalists about the court session, lawyer Javid Rzazade said witnesses and one victim had been questioned at the hearing.

On behalf of victim Zakir Badalov, his daughter Tamella Badalova gave a witness testimony. She noted that her father had been taken to MNS and intimidated by Akif Chovdarov. The witness’ account was similar to her father’s.

Note that Zakir Badalov had borrowed 100,000 USD from his relative Zakir Mustafayev at interest. He told the investigators that he had paid 125,000 USD in repayment of the loan. According to him, his relative Zakir Mustafayev threatened him via MNS and demanded an additional 150,000 and then 200,000. After that, he was taken to MNS and intimidated. His documents were taken away from him. Being a foreign national, they threatened to report him to migration services.

Next, witness, Sevinj Rustamova testified on behalf of victim Neyman Karimov. She said Neyman Karimov’s allegations were, for the most part, a lie. Rustamova noted that Neyman had borrowed the 30,000 AZN from her as a loan. “Neyman acquired 10,000 AZN of that from Binagadi prosecutor Miralakbar Seyidov. A while passed, but they did not give me back my money. In despair, I called Mr Miralakbar Seyidov and told him that his son owed me money. The prosecutor called upon Neyman and me to come before him. Mr Seyidov asked Neyman whether he had given the 10,000 AZN to his son. Neyman confirmed. Mr Seyidov repaid me the 10,000 AZN. Neyman was to repay the rest. But he did not. And, I complained to MNS about it through one of my acquaintances. They recovered my money from Neyman and gave it to me,” Rustamova said.

The witness added that Neyman Karimov’s uncle; Zakir Movsumov had also come to MNS and scolded Neyman at MNS. “He even said Neyman was the reason why his sister died. He said his sister could not stand Neyman’s debts and hanged herself,” the witness noted.

Next, former MNS employee Elchin Chiragov testified as a witness. He denied Neyman Karimov’s allegations. He said he had been unaware of the fact that Neyman Karimov was brought to MNS.

Thereafter, Vugar Mukhtarov, Head of former MNS’ Drug Enforcement Department who currently works for the State Security Service (SSS), took the witness stand. He testified that they had carried out an operation and brought Neyman Karimov to MNS and Elchin Chiragov had also participated in that operation.

At that point, defendant Salim Mammadov’s lawyer Javid Rzazade filed a motion for cross-examination of the witnesses. “The two witnesses had provided inconsistent testimony during both the investigation and the trial. Sevinj has also stated that Elchin Chiragov recovered her money from Neyman and returned it to her. For that reason, we want all 3 of the witnesses to be questioned together. Let them confront one another, and we will find out who is telling the truth about what,” the lawyer said.

The motion was left unconsidered.

Further on, Hafiz Aberkarov, Head of the Legal Department of Nasimi District Executive Power, testified as a victim. Aberkarov said he still could not understand why he had been given the status of a victim. “In 2014, when I was at Sabail District Executive Power, I received a call from MNS, and they told me that General Chovdarov wanted to see me. Chovdarov said there was a dispute between Mubariz Mammadov and Rafig Taghiyev over a land plot, and Mubariz claimed that he had given the money to Hafiz Abakarov. I told him that nobody had given me any money. I was not subjected to any pressure or intimidation. I do not have any complaint,” Aberkarov said.

The trial will continue on 25 January.

Background: Akif Chovdarov and others are charged with illegal imprisonment, banditry, extortion, unlawful possession of a weapon, illegal search activity, service forgery, and abuse and excess of authority, committed by a group of people with the use of a weapon.