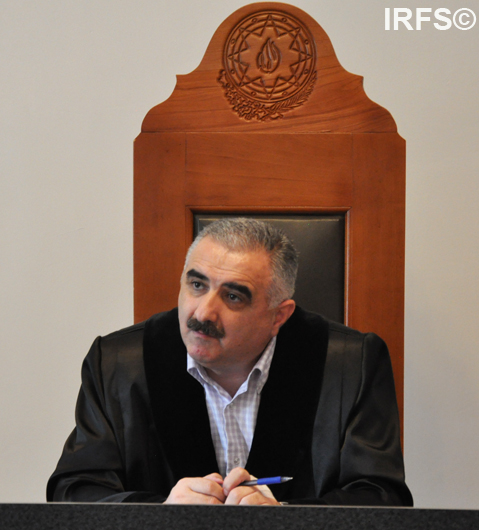 Today (24 June) a hearing took place in the Nasimi District Court on the case of Sergey Strekalin, who is accused of stabbing “Azadlig” Newspaper correspondent Agil Khalil (Khalilov).

Judge Shahin Abdullayev chaired the hearing. A. Khalil was not present at the hearing, and the judge learned the opinions of both sides to determine whether to continue or postpone the hearing. Prosecutor Eldar Hamzayev said that A. Khalil made contradictory statements during the preliminary investigation. That is why his participation in the hearing is important.

Then S. Strekalin’s defense lawyer Akif Khalilov also stated that Khalil’s participation is important. “If A. Khalil doesn’t want to come to the court, then he should be invited according to the law,” he added.
Then A. Khalil’s defense lawyer Elchin Sadigov talked and said that Khalil won’t participate in the hearing. Explaining Khalil’s position, Sadigov said that Strekalin is not the person who stabbed Agil Khalil. “The people who stabbed Agil Khalil and who indicated Sergey Strekalin in their place should be put on trial,” said Sadigov.

After all the statements were made, the judge conducted a deliberation and decided that A.Khalil should be brought to the court forcefully by the police.
Then the next hearing was scheduled to take place on 1 July at 11:30 a.m.
Lawyer Elchin Sadigov told the Institute for Reporters’ Freedom and Safety that the decision adopted during the hearing today is illegal. “According to procedural rules, the prosecutor and the person to defend the accused person should participate in court hearings.  Participation of the injured party and witnesses may be provided when the necessity arises. In this case, neither the prosecutor nor the accused party made statements on the essence of the case, but the judge made a decision to forcefully bring the injured party to court. This is against procedural rules.”

S. Strekalin is accused of stabbing “Azadlig” newspaper correspondent Agil Khalil on 13 March and is charged under articles 127.1 (infliction of minor bodily harm) and 234.1 (keeping of means of narcotics illegally) of the Criminal Code of Azerbaijan. At the same time, Khalil vehemently denies that he was stabbed by Strekalin. He believes the attack on him was actually committed affiliated with people who he exposed illegally cutting down trees on 22 February in “Zeytun Baglari.”