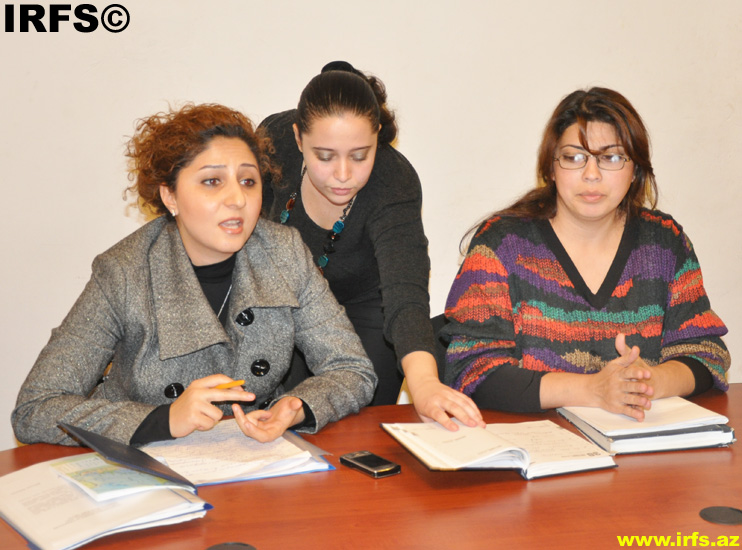 Today, 29 October, the employees of the Justice Ministry Registration and Notaries Head Department visited the office of the Institute for Reporters’ Freedom and Safety to inspect the organization.
The employee of the department Sabina Salmanova called the office of IRFS and said that they will visit at 3:00 p.m.  Although IRFS told them that that the chairman of the organization Emin Huseynov is in Romania to participate in Black Sea Countries NGO Forum, and they could postpone this until several days later, they stated that they would still definitely come.
When Salmanova Sabina Gadir gizi and Hamidli Gunel Bakhtiyar came at 2:30 p.m. they presented a letter that was signed by the Deputy Chief of the Justice Ministry Registration and Notaries Head Department Mehman Soltanov regarding their official visit to verify IRFS to determine whether “IRFS works in accordance with the regulation and legislation.” The letter was addressed to IRFS Chairman Emin Huseynov.
When they said that they wanted to familiarize themselves with the documents of the organization, they were told that these powers belong to the chairman Emin Huseynov and he is not in Azerbaijan at the moment. But the employees of the Justice Ministry said that they wanted to see the documents urgently and they asked the employees of IRFS a lot of questions during an hour. The questions were about the founders of organization, members, grants, and the registration of IRFS by the Justice Ministry.
Finally, after communicating with Emin Huseynov, the employees of the Justice Ministry said that the examination was postponed until November 2 and then left the office.
IRFS correspondents contacted several journalist organizations – the Media Rights Institute, “Yeni Nesil” Journalist Union, and the Democratic Journalists League, and found out that similar inspection in these organizations did not take place.
The Institute for Reporters` Freedom and Safety Public Union is engaged in investigating the situation in the area of speech freedom, in defending the rights of journalists, mass media, and prepares reports and proposals on the basis of monitoring. IRFS was founded in May 2006 by a group journalists and the organization was officially registered in the Justice Ministry in September of the same year.
IRFS will release a statement tomorrow regarding this issue.
Previous Post