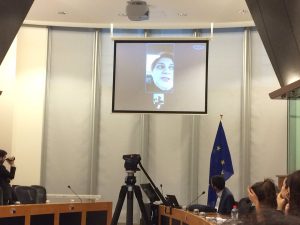 On 6 February, the European Parliament launched hearings on Azerbaijan titled “Relations between Azerbaijan and the European Union: Human Rights Swept under the Red Carpet?” The focus of the hearings, held amidst Azerbaijani President Ilham Aliyev’s visit to Brussels, is Azerbaijan’s human rights record.

Investigative journalist Khadija Ismayilova and Meydan TV director Emin Milli were supposed to make speeches at the hearings. Khadija Ismayilova, who is under a ban from leaving the country, planned to join the discussions from Baku via Skype.

However, shortly before the start of the hearings, electricity supply and internet access in Khadija Ismayilova’s apartment cut out, as the journalist wrote on her Facebook page.

As a way out of this situation, the reporter used a taxi and managed to deliver her speech.

“Shortly afterwards, three state traffic police cars and several plain-clothes officers stopped the cab. The driver got out of the car to talk with them, and I concluded my speech. Then, a policeman got into the car and said ‘we are off to the car impound’. In the meantime, journalist Shahvalad Chobanoglu was coincidentally passing by. He saw me and stopped his car. I shifted to his vehicle, and they took the taxi to the impound lot for no reason,” the journalist said.

Background: Khadija Ismayilova was arrested on 5 December 2014. They sentenced the journalist to 7 years and six months in jail on charges of tax evasion, misappropriation, illegal business and abuse of official powers. On 25 May 2016, the Supreme Court of Azerbaijan acquitted the journalist of the charges of misappropriation and abuse of official powers and released her from prison on a suspended sentence of 3 years and six months. On 8 August 2016, Khadija Ismayilova’s suspended sentence was reduced to 2 years and three months.