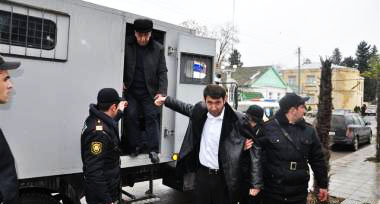 On January 14th, 15th and 16th the Khachmaz Regional Court heard the case of Khayal TV executive director Vugar Gonagov, chief editor Zaur Guliyev and others, who were arrested in connection with the public protest which took place in Guba city on March 1st. Judge Anar Ibrahimov presided over the hearing.In his address, Vugar Gonagov stated that he had not re-edited the video of former Guba mayor Rauf Habibov’s speech, and that this video had been uploaded on YouTube by user named “DJ Mustafa”. Gonagov also said that he was illegally kept in prison for 9 months. The journalist noted that Habibov’s speech was filmed by Khayal TV cameraman Alimammad Alimammadov, but was not broadcast on the channel at the request of the Mayor’s Office.

Khayal Mammadov and Sahib Bagirov, who testified as a witness, confirmed Gonagov’s statement that the video was posted on YouTube by a user named “DJ Mustafa”, adding that the real person behind this name is Mustafa Nurullayev who published the video on February, 2012.

On January 15th, the trial continued with witness testimonies. Commenting on his previous testimony that Rauf Habibov’s speech was re-edited, Chief of Guba City Alpan Village Municipality Seyfi Gubatov said he heard this from local people.

After the online dissemination of a video in which Rauf Habibov (the then chief of Guba City Executive Power) insulted Guba citizens, there was a riot in Guba on March 1st. The citizens set Habibov’s house on fire and there were clashes between people and the police. After the protests president Ilham Aliyev dismissed Rauf Habibov from his post. On March 13th Khayal TV correspondents Vugar Gonagov and Zaur Guliyev and up to 20 other Guba residents were arrested in connection with the protest. Vugar Gonagov and Zaur Guliyev are accused of infringement of public order (Article 233/Criminal Code) and abuse of position (Article 309/Criminal Code).