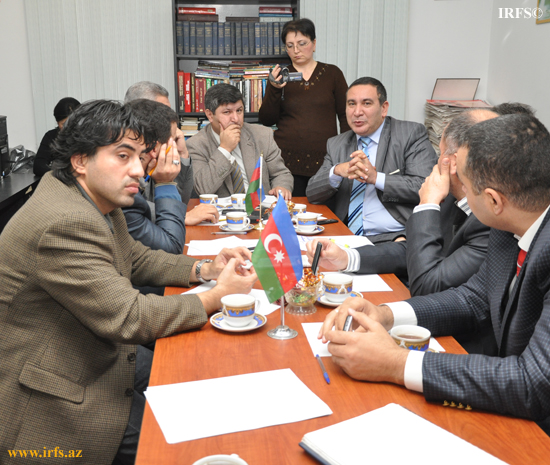 Today, 11 November, in the editorial office of “Khural” newspaper, a discussion was conducted on the theme “State Support Fund for Mass Media.”
“Khural” newspaper editor-in-chief Avaz Zeynalli, “525-ji gazet” newspaper editor-in-chief Rashad Majid, media expert Alasgar Mammadli, “Reyting” newspaper editor-in-chief Afig Mirzabayli, Democratic Journalists League Chairperson Yadigar Mammadli, Institute for Reporters’ Freedom and Safety Chairman Emin Huseynov, “Milli yol” newspaper and “Polygon” information agency editor-in-chief Shahin agabeyli and “gundalik Baki” newspaper editor-in-chief Habil Valiyev participated in the event. The event participants said in their speeches that although the State Support Fund for Mass Media was created to improve the press, the fund is not in the position to fulfill this function. They stressed that the small amount allocated by the government for the development of the media is not enough for development.
“In fact the government has to create conditions for free business, and as a result the media should also benefit from the advertisement market and should be able should be able to finance itself,” said event participants and emphasized that the amount allocated from the state budget as assistance or grant is not sufficient for improvement.
“Granting the media the credit in large amounts and for longer periods would benefit the media more,” said media heads. During the event it was proposed that the newspapers create NGOs to develop mass media and not be dependent on the government.
Previous Post