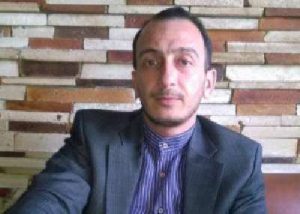 Ahsan Nuruzade, a supporter of theologian Taleh Bagirzade, who has been missing for a week, turned out to be in the custody of the Main Organised Crime Department (MOCD) of the Ministry of Internal Affairs, as anticipated, Nuruzade’s lawyer Yalchin Imanov reported on 30 January.

According to the lawyer, after his appeals to various agencies, he found out that the youth believer was at MOCD. The same day, the attorney went to MOCD, where he was told that Nuruzade had been transferred to a detention facility in Binagadi district where administratively jailed people were held.

Imanov met with Nuruzade in the detention facility. Ahsan Nuruzade told the lawyer that he was detained not far from his home by three men in civilian clothing on 24 January. They took him to MOCD, and then to Narimanov District Court, where they sentenced him to 10 days in jail for disobeying a police officer.

“I have obtained a copy of Narimanov District Court’s decision. The decision says that Ahsan, allegedly, uttered expletives when passing by the Main Organised Crime Department. Supposedly, he was protesting against the illegal arrest of Taleh Bagirzade, Movsum Samadov and other theologians by swearing while talking on the phone. At that moment, two police officers approached him settle down and follow the laws, but he cursed them in response. Allegedly, he also attempted to run away when the police tried to detain him,” the lawyer said.

Ahsan Nuruzade told his lawyer that the things written in the decision were a lie and had never happened. The attorney further noted that the youth had been returned to MOCD after the issuance of Narimanov District Court’s decision. Although he was not beaten up during the six days spent in MOCD custody, he was psychologically harassed and in some cases insulted.

“At the Department for Struggle against Religious Extremism of MOCD, he was asked why he supported Taleh Bagirzade, the identities of those who had attended the trial, his ties to human rights defender Ogtay Gulaliyev, media and writer Zumrud Yagmur, financial sources of the Muslim Union Movement and its links with Iran. He was advised to stay away from Taleh Bagirzade and the National Council, as they ‘betrayed the statehood’. Ahsan Nuruzade told them that he was not doing anything illegal and donations financed the Muslim Union Movement. His responses provided during this interrogation were typed on a computer but were not drawn up as a protocol. And, Nuruzade was not asked to undersign them,” the lawyer added.

Yalchin Imanov plans to appeal Narimanov District Court’s decision. “First of all, the event mentioned in the decision had not happened at all. Even if it had, why was an administratively sentenced person held at the MOCD and informally interrogated there? Why was not his family informed about his whereabouts? All this suggests that the decision against Ahsan Nuruzade is illegal and unjustified. He has been punished for supporting Taleh Bagirzade and attending their hearings,” the lawyer stressed.

Background: On 26 November 2015, an armed incident occurred between a group of believers and police officers in Nardaran settlement of Baku, during an operation conducted by the police. According to official reports, the shootout resulted in the death of six, including two police officers. Taleh Bagirzade, the leader of the Muslim Union Movement, and several believers were detained as part of the operation. A criminal case has been launched about the incident by the Prosecutor General’s Office of Azerbaijan Republic.
APFP Deputy Chairman Fuad Gahramanli, who was not present during the incident, was arrested on 8 December 2015. His lawyer Yalchin Imanov said that Fuad Gahramanli was arrested due to his Facebook posts and his case was merged with the criminal case of the people arrested over the Nardaran incidents.
Fuad Gahramanli, who is not a member of the Movement but yet accused of promoting their cause, was charged with incitation of the people to violence, incitation against the government, and instigation of hatred with intent of violence.
On 25 January 2017, Baku Grave Crimes Court announced the judgment on the case. Under the court’s judgment, Taleh Bagirzade was sentenced to 20 years, Abbas Huseynov to 20 years, Fuad Gahramanli to 10 years, Jabbar Jabbarov to 19 years, Rasim Jabrayilov to 17 years, Ramin Yariyev (who was underage at the time of commission of the crime) to 10 years, and each of Shamil Abdulaliyev, Zakir Mustafayev, Jahad Babakishizade, Abbas Guliyev, Ibrahim Khudaverdiyev, Etibar Ismayilov, Bahruz Asgarov, Ali Nuriyev, Alibala Valiyev, Farhad Balayev and Abbas Taghizade to 14.5 years in prison.