Kleptocracy in the OSCE states, a threat to democracy and human rights 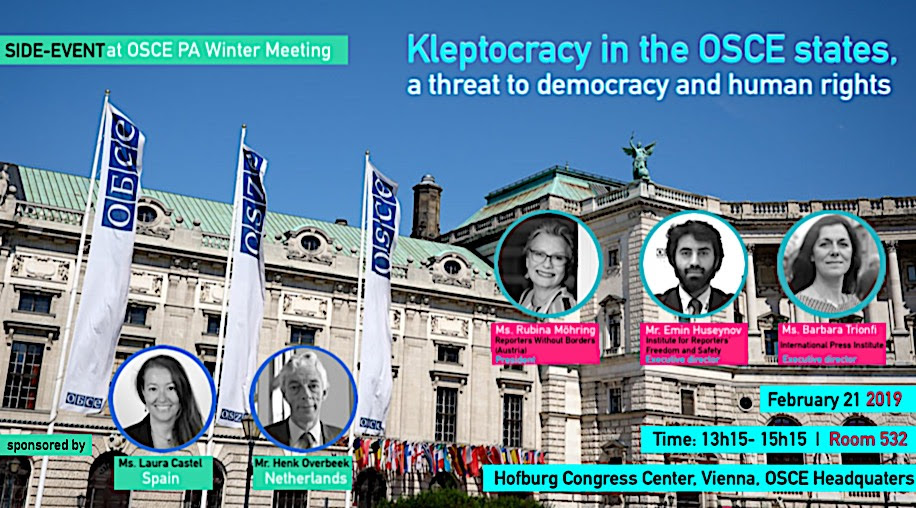 The Institute for Reporters’ Freedom and Safety

cordially invites you to a side event:

Kleptocracy in the OSCE states, a threat to democracy and human rights

Thursday, February 21, the Institute for Reporters’ Freedom and Safety is organizing a side event during the OSCE Parliamentary Assembly Winter Meeting in Vienna.

The main issue discussed at the event will be the persecution of investigative journalists and human rights activists in countries like Azerbaijan, Malta, Slovakia, Russia, Ukraine, Moldova, Kazakhstan and others. Also addressed will be the kleptocratic regimes of the post-soviet countries and most notably Azerbaijan and Russia and the money laundering schemes which saw important amounts of capital taken out of the country through western financial institutions, namely from Baltic countries as well as Scandinavian countries and the UK.

Ms. Laura Castel, from the Spanish National Delegation and Mr. Henk Overbeek, from the Netherlands National Delegation have shown political support for this cause by cosponsoring the event. Ms. Rubina Möhring, President of Reporters Without Borders (Austria), Ms. Barbara Trionfi, Executive director of International Press Institute and Mr. Emin Huseynov, Executive Director for the Institute for Reporters’ Freedom and Safety are invited as guest speakers.

Side Event: Azerbaijan’s Kleptocracy, Repression and Council of Europe Membership

IRFS: Azerbaijan’s Refusal to Investigate the Murder of Elmar Huseynov is Yet Another Blow to Freedom of Expression