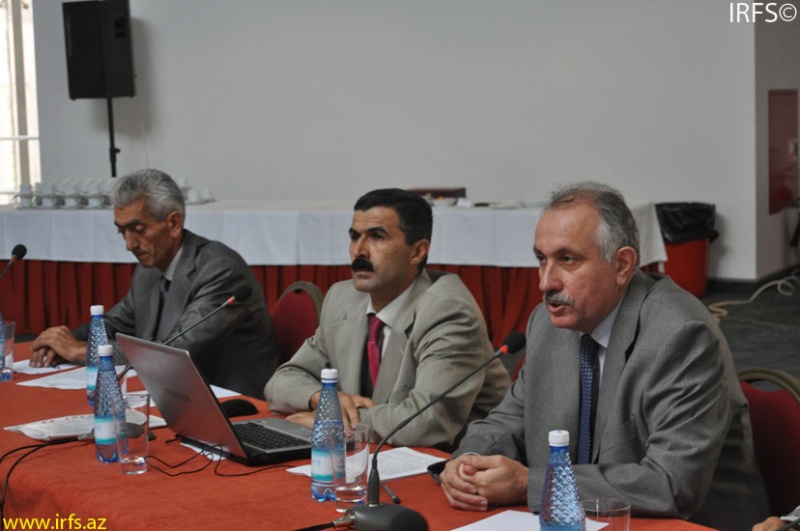 Kur Civil Society will continue to monitor the use of the state funds allotted for the elimination of the consequences of 2010 Kur river floods and will defend the rights of the flood victims despite any pressure.
This was the main idea in the roundtable held by Kur Civil Society in the IRFS media center on June 18th.
“I will continue my job from the point when I was arrested” said Kur Civil Society coordinator Ogtay Gulaliyev, who was released on June 13th after 2 month’s imprisonment. He noted that his previous sentence of pre-trial detention has been changed, but the charge against him for making appeals to mass public disorders has not been lifted. Gulaliyev was also charged with such nonsense charges such as “demolishing a bridge near Shirvan city”, “blocking a road”, “destroying police cars” and so on. Gulaliyev intends to meet with the interior minister Ramil Usubov to speak about the police violations that he faced.
Kur Civil Society member Mehman Aliyev drew the attention to the arrest of Sabirabad resident Ilham Amiraslanov. He is charged with illegal possession of fire-arms. Aliyev noted that Amiraslanov actively defended the victim’s rights from the first day, and participated in the meeting with the president and the emergency situations minister. Amiraslanov is the head of Sarisu Regional Social Initiatives public union.
The reason behind the government’s putting pressure on local activists is its intention to hide the outcomes of the work it has conducted for the elimination of flood consequences, as much of the funds were not used for intended purposes and much of the problems of the flood victims have not been solved. Kur Civil Society plans to publicize the results of its new monitoring in the recent future.
Although nearly 500 million manats have been allotted for flood victims, approximately 10 000 families need new houses or repairs of their current houses. “The construction of 3000 houses, the area of each of which is between 70 and 90 square meters, cost 63 000 manats. With this money one can buy a new apartment in Baku” said Gulaliyev.
Mehman Aliyev also added that on June 4th he met with Ali Hasanov, the head of the socio-political department of the presidential administration, which played an important role in the release of Ogtay Gulaliyev from prison.
Kur Civil Society hopes that the problems of the flood victims will be solved in a transparent way. The Society calls upon the government to place the list of the compensated victims in the internet.
Previous Post