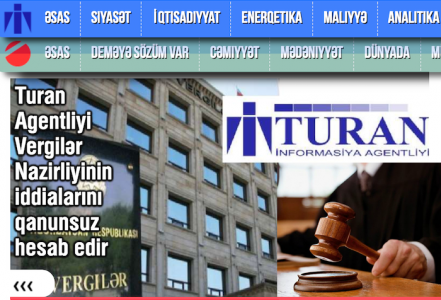 The lawsuit was requesting that the decision to hold an unscheduled on-site tax inspection of the Agency for the period 2010-2017 be ruled invalid and unlawful.
The court did not consider the lawsuit acceptable based on the argument brought by the representative of the Ministry of Taxes that a decision on an on-site inspection is not an administrative act and cannot be appealed.

Turan’s lawyer Fuad Agayev expressed disagreement with the defendant’s arguments and the court’s decision “According to the Rules for Carrying Out On-Site Tax Inspections approved by the Ministry of Taxes on 7 September 2016, the taxpayer has the right to appeal the decision on inspection within 30 days. We are going to file an appeal with the Court of Appeals,” the lawyer said.

Background: The Local Revenues Department initially imposed a penalty in the amount of 5,000 AZN against Turan Agency for the year 2016. However, following an administrative appeal filed by Turan, a higher authority within the Ministry of Taxes overruled this decision on 30 June after conducting its own investigation. On 7 August, the Department again calculated [unpaid] taxes, this time in the amount of 9,000 AZN for the year 2016 and 37,000 AZN for the period 2014-2016. A criminal case was launched against Turan Agency.
On 25 August, Turan Director Mehman Aliyev was arrested. On 11 September, he was released under recognizance not to leave Baku.