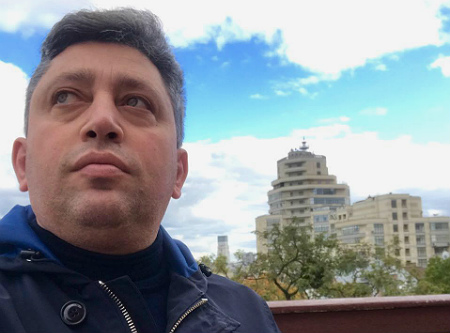 Journalist Fikrat Huseynli has been detained at Kiev Boryspil Airport and taken into custody, according to an official statement by the Border Service of Ukraine. It has been confirmed that journalist Fikrat Huseynli was detained in Kiev airport after he had been declared wanted by Interpol. Fikrat Huseynli is charged under Articles 178 (fraud) and 318 (crossing the state border of the Republic of Azerbaijan in an illegal manner) of the Criminal Code of Azerbaijan. According to the journalist, the Ukrainian side is planning to extradite him to Azerbaijan unlawfully. “My transfer to Azerbaijan is not legally possible. However, from their actions, I am sensing that they want to abduct me and take me to Azerbaijan, like they did to Afgan Mukhtarli,” Huseynli noted.
According to Fikrat Huseynli, after his detention, several employees of the Azerbaijani Embassy in Ukraine appeared in the airport police station, but none of them talked to him.
Huseynli added that he had contacted the Ministry of Foreign Affairs of the Netherlands, the citizenship he currently holds, but as it was a non-business day, the issue would be investigated earlier next week.
Huseynli was later taken to a detention centre in Kiev.
Prominent Ukrainian lawyer Dmitriy Mazurok has joined Fikrat Huseynli’s defence team.
Previous Post

IRFS Statement: Ukraine should not Help Authoritarian Countries in Cracking down on Freedom of Expression