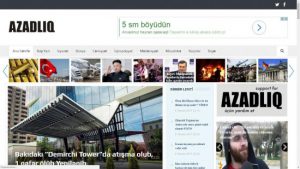 On 17 April, the legal dispute between Azadliq.info and Shirin Abdullayev continued in Yasamal District Court, under presiding judge Ayaz Mammadov.

Shirin Abdullayev, who was recognised as a victim during the case of journalist Fikrat Faramazoglu, has sued Azadliq.info, the website of the defunct Azadliq newspaper, over a report on the journalist’s trial authored by the Azadliq.org website and re-posted on Azadliq.info with the title ‘Journalist’s Slanderer Appears to Be Friends with Chief of Main Organised Crime Department’. Abdullayev filed a lawsuit with the court as the article was an insult to his honour and dignity. At the previous hearing, the defendant’s representative objected to the lawsuit by noting that the article had been published with reference to another site. The judge proposed that the plaintiff revise his lawsuit. At the hearing held on 29 March, Abdullayev’s representative lodged a motion to postpone the hearing based on the fact that they had sent an inquiry to the Ministry of Transport, Communications and High Technologies in order to clarify the registered and legal address of Azadliq.org, the source of the article.

At today’s hearing, the plaintiff refused to change the lawsuit based on the fact that the article posted on Azadliq.info had a different title than the one on Azadliq.org. The plaintiff’s representative stressed that the word ‘slanderer’ in the title of the article was clearly damaging to Shirin Abdullayev’s honour and dignity.

The judge ordered that a linguistic examination be conducted. The proceedings will continue following the outcome of this investigation.

Background: Fikrat Faramazoglu was arrested on 30 June 2016. He was charged under Article 182 (extortion) of the Criminal Code. On 2 July 2016, Narimanov District Court ordered his pre-trial detention.