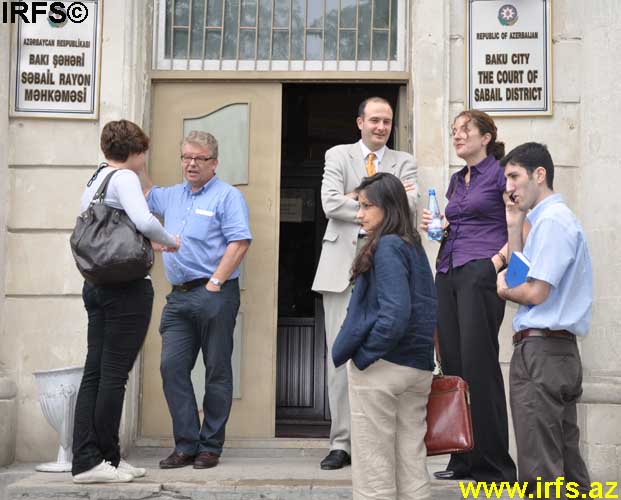 The hearing was held closed and the representatives of media and diplomatic corps, and other monitors were not allowed in the hearing.
Lawyer Isakhan Ashurov told the Institute for Reporters’ Freedom and Safety that the lawsuit was not fulfilled. The lawyers filed a motion demanding that the hearing be held under public supervision, but the motion was not fulfilled, according to Ashurov.
“People responsible to answer questions – heads of press services – did not participate in the hearing. The investigator was the only one to participate, but was not able to answer the questions,” said Ashurov emphasizing that they will file an appeal after they obtain the decision.
I.Ashurov stated that Emin Milli and Adnan Hajizade objected to the unfair investigation and refused to take part in the hearing.
In their joint statement disseminated on 11 and 14 July 2009, the Chief Prosecutor’s Office and Baku City Chief Police Department stated that A.Hajizade and Emin Milli are guilty. Claiming that presumption of innocence of A.Hajizade and Emin Milli were violated in these statements, the lawyers appealed to court.
On 8 July, at approximately 8:00 p.m., Emin Milli and Adnan Hajizade were sitting at a table in “Lebonese” (Livan) restaurant along with several other young adults, when two people that looked like sportsmen came up to them, and attacked them causing physical injuries. Although they appealed to police as victims, police detained Adnan and Emin as suspected persons for 48 hours and freed the attackers. On 10 July, Sabail District Court Judge Rauf Ahmadov issued a decision under article 221.2.1 (hooliganism) of the Criminal Code to sentence Emin Milli and Adnan Hajizade to two months pre-trial detention. On July 20 the Appellate Court upheld the decision of the lower court. Both Emin Milli and Adnan Hajizade are being held in the Investigative Prison of Baku.

GANIMAT ZAHID HAPPY ABOUT HIS DAUGHTER’S ADMISSION TO UNIVERSITY