Luca Volonte and His Ties to Azerbaijan 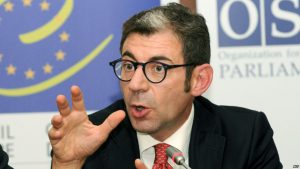 Last week, for the first time in the history of the Council of Europe, The Bureau of the Council of Europe Parliamentary Assembly (PACE) has taken a groundbreaking move to investigate allegations of corruption and fostering of interests made against two Azerbaijani members of PACE, Elkhan Suleymanov and Muslim Memmedov, and Luca Volonte, a former member of PACE and a long-time friend of the Azerbaijani ruling establishment. IRFS has prepared a special dispatch to provide further insight into the profoundly inappropriate relationship between Volonte and the New Azerbaijan Party (YAP/NAP)

Luca Volonte to President Aliyev : “Our work in the Council of Europe shows that it is possible to work together”.

Luca Volonte, a former Vice President of PACE and a former member of the Union of the Centre party in Italy, has been accused of accepting 2.3 million EUR in bribes to help quash a report that highlighted the plight of political prisoners in Azerbaijan. In addition, it appears that, Volonte, who was then also president of the European People’s Party (EPP) at PACE, was helping Azerbaijan’s ruling party YAP to acquire membership in the Centrist Democrats International and EPP(parties to be clear?).

During his meeting with Aliyev in July 2011 Volonte said to Azerbaijani President: “You met Mister Martens, Chairman of EPP. You desire also to establish a friendly relationship between YAP and EPP. Our work in the Council of Europe shows that it is possible to work together. Christian Democratic Party and some other parties also wish to establish that because we have the same values to promote and defend human rights, family values, free society and free market economies. Surely, we could suggest to Mr.Martens that we can use this opportunity to create a strong friendship between EPP and other parties outside Europe”.

Volonte must have been abusing his mandate as a member of the PACE delegation on the official visit to Azerbaijan, by promoting cooperation between his party, EPP and the ruling party, YAP at the official meetings. Furthermore, his statement that Azerbaijan’s ruling party, largely criticised for human rights abuses and suppressing dissent, and the pan-European EPP party, and CDI “ have the same values to promote and defend human rights, (…), free society” should have raised eye-brows in Brussels, as both the EPP and CDI claim to be committed to human rights and pluralistic democracy.

A membership to the CDI, with a prospect of becoming a part of the prestigious EPP family, could have helped create additional legitimacy for the increasingly dictatorial ruling regime.

The fact, that Azerbaijani ruling party YAP’s requests to join CDI and EPP, have not been supported, demonstrates that both groups stay committed to their values, and would not allow a political party, engaged in widespread human rights abuses and constant attack on democratic values back home, become a part of a democracy club.

Notably, at the meeting with Volonte, and in what sounded as a mockery of the Council of Europe values, President Aliyev said: “I think that the membership in the Council of Europe I am sure helped us a lot to bring the criteria of our system closer to criteria of the member states of the European Union which are the countries with long history of democratic traditions. This is actually our targets”.

The transfer of power from Heydar Aliyev to his son, Ilham Aliyev, who was elected president in October 2003, raised hopes that the Soviet-style regime would become more moderate. However, Ilham Aliyev disappointed these hopes, despite his rhetoric on the need to cooperate with the West, including the Council of Europe, the EU, and NATO, and enact reform to comply with European standards, and has instead continued many of his father’s practices, including his strategy of authoritarian rule.