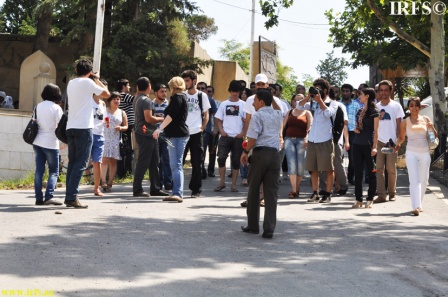 On July 22, media representatives and youth activists joined the first ever Press Freedom Walk to remind about importance of freedom of press.
The walk started from the first Alley of Honor; the participants visited the grave of Hasan bay Zardabi.

On July 22nd 1875 Hasan bay Zardabi published the first Azerbaijani newspaper “Akinchi” (Cultivator) and since then this date has been marked as the National Press Day.

The Press Freedom walk participants spoke about the history of the national press and the problems of the modern Azerbaijani media. For instance, Azadlig newspaper editor-in-chief Rovshan Hajibeyli touched upon the problems with the distribution of the newspapers.

The group then visited the grave of Monitor magazine editor-in-chief Elmar Huseynov in the second Alley of Honor. REAL movement co-founder Natig Jafarli talked about the pressures on the journalists.

Human Rights Club head Rasul Jafarov stressed that the struggle for freedom of press is ongoing.

The group also visited the grave of Najaf Najafov, the founder of the first independent Azerbaijani newspaper “Azadlig”. Here, the journalists spoke about the Najafov’ outstanding input to development of Azerbaijani media.

At the end of the walk the group visited the graves of late journalists Chingiz Mustafayev, Salatin Askerova, Ali Mustafayev and Fakhraddin Shahbazov.