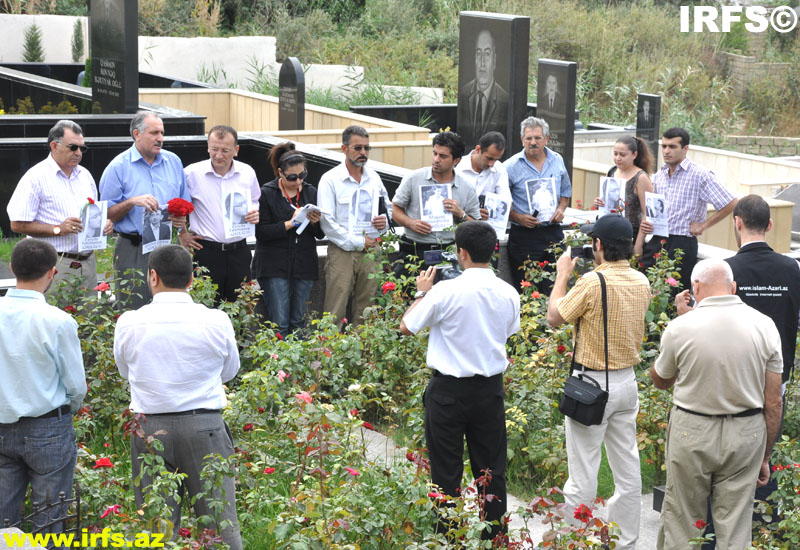 Today, 8 September, a group of journalists visited the graves of slain Editor-in-chief of “Monitor” Journal Elmar Huseynov and Founder of “Azadlig” Newspaper Najaf Najafov in connection with International Solidarity Day of Journalists.
“Turan” Information Agency Director Mehman Aliyev spoke and said, “Although the number of journalists coming here today is fewer than the previous years, the journalists continue fighting despite threats against them.”
Satiric journalist Sakit Zahidov expressed regret that the murderers of Elmar Huseynov are still at large. “I swear that I will not divert from my path until Elmar’s dream about Azerbaijan is restored.”
Institute for Reporters’ Freedom and Safety Chairman Emin Huseynov called on journalists to put away all disagreements among them, have solidarity for free speech and unite. “Imprisoned journalists also express objection regarding this issue,” said E.Huseynov. “We need to unite taking all these into consideration. Otherwise there will be fewer journalists coming here during the next years or all the journalists coming here will be arrested.”
The International Solidarity Day of Journalists has been celebrated since1958. It is related to the execution of Czech anti-fascist journalist Yulius Fuchik on 8 September 1943.