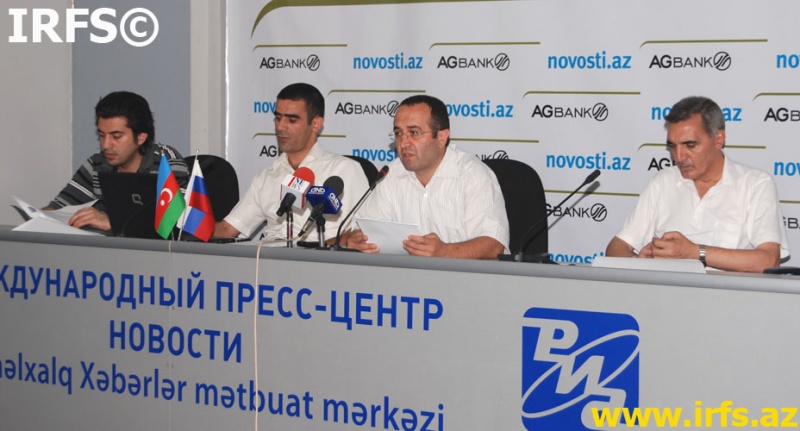 Today the Media Rights Institute (MRI) revealed its report on the legal situation of the media during the first six months of 2008.
MRI Chairman Rashid Hajili opened a press conference in which the report was presented, noting that the situation of media was good during the first six months of this year. Hajili stated that along with charges defamation, other negative incidents against journalists have also increased. He noted Agil Khalil’s incident as an example of this. Hajili said he and his colleagues used materials from the Institute for Reporters’ Freedom and Safety in addition to other resources when preparing their report.

Then MRI’s project coordinator Khalif Agaaliyev talked about the incidents that happened in media during the half year and disclosed the results and opinions of the organization. Agaliyev spoke about fining the media, changes made to part of a law which no longer exists, access to information and AzTV’s status. According to him, lawsuits seeking a grand total of 1,212,000 AZN were filed during the first six months of 2008. In addition, an ombudsman on information matters hasn’t been appointed yet. And AzTV wasn’t invalidated, which is against government’s international commitments. Agaaliyev emphasized that threats, physical pressure and psychological assaults against journalists are on the rise.

IRFS Chairman Emin Huseynov talked about access to information and said that government organs either don’t respond to inquiries or don’t answer questions appropriately. “Government organs toss back and forth inquiries IRFS sends regarding the erection of a monument to slain editor-in-chief of ‘Monitor’ Magazine Elmar Huseynov to one another. The Presidential Administration commissions the Yasamal District Executive Power with this. The Executive Power states the Culture and Tourism Ministry will solve this issue. And then that ministry advises us to appeal to the Presidential Administration again. However, the president never responds,” said Huseynov.