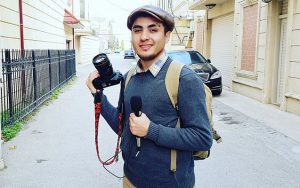 The Ministry of Internal Affairs has filed a private prosecution suit against IRFS Chairman and prominent blogger Mehman Huseynov. As reported by lawyer Elchin Sadigov on 9 February, the complaint has been filed with Surakhani District Court and is pending before Judge Jeyhun Gadimov. The preliminary hearing on the case is scheduled for 10 February, 10 am. The lawyer added that he would ask for the postponement of the hearing, as the private prosecution complaint had not been served upon them. MIA wants Mehman Huseynov to be prosecuted under Articles 147 (slander) and 148 (insult) of the Criminal Code.

Blogger Mehman Huseynov has told our website that although he and his lawyer had been delivered the summons about the hearing, they were not given the statement, so it was unclear what exactly he was being charged with.

Mehman Huseynov added that he believed that, in all cases, the charges would be related to his professional activity.

A private prosecution complaint implies criminal responsibility of a person and may lead to imprisonment.

Background: Mehman Huseynov was detained in the evening hours on 9 January. He was released after being convicted and fined AZN 200 for disobeying a police officer. Following the hearing, Huseynov told journalists that he was harassed for his professional activities and had been tortured by the police officers.

Defendants in Second Nardaran Case Recount Tortures Inflicted on Them