Ministry of Internal Affairs: Lawyer Fariz Namazli Has Not Injured Anyone 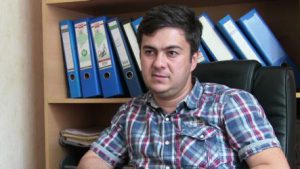 The Ministry of Internal Affairs (MIA) has shed light on lawyer Fariz Namazli’s interrogation by the police.

According to MIA spokesman Orkhan Mansurzade, Baku City Main Police Office has investigated the facts of harassment of Fariz Namazli and provocation committed against him.

“It has been found that, on October 20, the 28th police station of Yasamal District Police Department received information that Khatai Shahverdiyeva, a resident of Khasha-Khuna settlement of Khazar district of Baku, had come to the First Aid Station #8 with the diagnosis of ‘traumatic brain injury’. Khatai Shahverdiyeva filed a police report with the 28th police station, indicating that she was beaten by lawyer Fariz Namazli in Baku Appeal Court the same day, i.e. October 20, at around 3.30 pm. On October 21, the Bailiffs Department of Baku Appeal Court told the 28th police station that, during a hearing on October 20, the injured party’s relatives attacked defendant’s lawyer Fariz Namazli, insulted him and damaged the witness stand. During the investigation, the footage recorded in the courtroom was examined and Khatai Shahverdiyeva’s allegation that lawyer Fariz Namazli had beaten her did not prove true. On the contrary, it was found that in fact her family members had committed the above-mentioned illegal actions in the courtroom,” Orkhan Mansurzade said.

The MIA official further noted that Fariz Namazli had been invited to the 28th police station to give a statement and the lawyer refused to undergo the relevant [medical] examination saying that he had not sustained any injury during the conflict.

The material collected with regard to the incident has been referred to the Investigations Section of Yasamal District Police Department for legal assessment.

Background: On November 2, lawyer Fariz Namazli was summoned to the 28th police station of Yasamal District Police Department. The reason cited for the summons was the incident that took place in Baku Appeal Court on 20 October 2016. During the incident in question, a group of people assaulted the lawyer in the courtroom and tried to injure him.

Two People Arrested in Ganja for Writing Slogan in Park