Two People Arrested in Ganja for Writing Slogan in Park 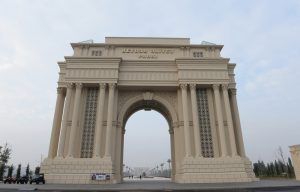 On November 5, NIDA Civic Movement member Elmir Tahmin and activist Tapdig Mammadov were detained in Ganja city for spray-painting the slogan “No to Dictatorship” in Heydar Aliyev Park located in New Ganja town. On November 6, the court sentenced them to 30 days in prison. According to the youths’ relatives, the youths were tortured while in police custody and did not have lawyers at the time of arrest.

On November 6, Elmir Tahmin’s mother was sacked by the aluminium factory she was working for.

Recall that, prior to this, activists Giyas Ibrahimov and Bayram Mammadov were arrested for writing graffiti.

Members of opposition civic movement NIDA and final-year students of Azerbaijan Slavic University, Giyas Ibrahimov and Bayram Mammadov were arrested on drug charges on 10 May 2016. They were involved in writing graffiti on a statue of former President Heydar Aliyev. Both youths have claimed that they have been arrested for exercising their right to freedom of expression.

The two youths went missing since the evening hours on 10 May 2016. It was only on 12 May 2016 that the Ministry of Internal Affairs released information on the youths’ arrest.

Both activists were charged with drug possession upon arrest. On 12 May 2016, Baku Court sentenced Bayram Mammadov and Giyas Ibrahimov to a 4-month pre-trial detention. Their detention term was further extended in September. The youth activists have reported being subjected to torture whilst in detention. On October 25, Baku Grave Crimes Court sentenced Giyas Ibrahimov to 10 years in jail.

Ministry of Internal Affairs: Lawyer Fariz Namazli Has Not Injured Anyone