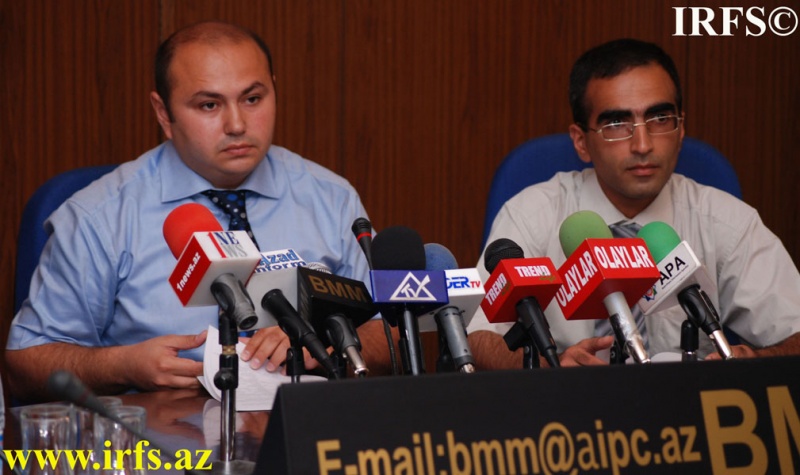 The list of violations containing 97 items that are divided as follows: “Reyting” Newspaper – 13, “Bizim Yol” Newspaper – 6, “Ses” Newspaper – 3, “Kaspi” Newspaper -3, “525-ji Gazet” – 2, “Iki Sahil” Newspaper – 1, “Yeni Azerbaijan” Newspaper -1 and “Sharg” Newspaper – 1. In addition, “Ayna” Newspaper’s name is mentioned four times in the list, but one of these items actually appears to be a repeat. Item 35th cites the article “Reforms Slow in Azerbaijan Army,” which was published in “Ayna” newspaper on 7 June and claims that this article violated journalistic ethics, and then an article of the same name is also listed as the 95th item – although the article, despite being published on the same date was apparently published in the 38th edition on “Ayna” Newspaper on page 3, not in the 8th edition on page 10 as it was indicated in item 35. The author of this article particular article is Jasur (Mammadov) Sumerinli, the Director of “Doktrina” Center of Journalist Union on Military Research, the editor of “Ordunun Aynasi” and “Armeyskoe Zerkalo” Newspapers published as insert in “Ayna” and “Zerkalo” Newspapers with financial support from NATO. Sumerinli is considered to be one of the most professional and well-informed journalists are military issues.

Interestingly another group of organizations, under the umbrella of the “Azerbaijan Journalist Organs Coalition,” is also conducting the monitoring of newspapers. In particular, this project is being carried out by “Najaf Najafov” Fund, “Azerbaijan Journalist Union”, “Yeni Nesil” Journalist Union, the Democratic Journalists League, and “RUH” Journalist Defense Committee, with financial support from the US Embassy in Azerbaijan. On 7 June this coalition presented the results of six months of monitoring. According to it, articles in which professional ethics codes were violated most frequently were published in “Ses”, “Ideal” and “Muasir Musavat” Newspapers, a stark contract to the information presented today.

The Institute for Reporters’ Freedom and Safety suspects that the monitoring which was presented today was not carried out in a professional or objective manner. In edition to the evidence noted above, on 20 June 2008 an article titled "It's proven that Emin Huseynov is working with missionaries" and subtitled “It's been revealed that KrishnaDodi Kramniki injured him” was run in “Ses” newspaper. In the article, it was alleged that on 14 June Institute for Reporters' Freedom and Safety Chairman Emin Huseynov “forged relationships with European religious sects and expressed opinions about the importance of Che Guevera propaganda." According to the text, "E. Huseynov suggested establishing ties with the PKK if needed. However, Krishna Dodi Kramnikin didn't like the idea of connecting ties with PKK. The argument that broke out between D.Kramnik and E.Huseynov turned into a fistfight. "Alaturka" restaurant leadership couldn't stand the problem and was forced to appeal to law-enforcement organs. Policemen, who came to the restaurant where the incident took place, were able to calm the violent forces.”

Of course, as IRFS noted before when the article was first published, this is a complete fabrication. E. Huseynov’s position was not sought by “Ses,” and the article contains slanderous, unsubstantiated accusations against Huseynov. Interestingly however, the organizations conducting the monitoring today did not register a violation for this article.

Several other slanderous and unsubstantiated articles have also been recently published in “Ses” Newspaper claiming that “Azadlig” Newspaper correspondent Agil Khalil is gay, and is being used by the APFP (Azerbaijan Popular Front Party) to intensify the pre-election situation. These are also not reflected in the monitoring results.

Another issue, is that it is not known who conducted the monitoring. In response to the question “Who carried out this monitoring?,” Mirbashiroglu said, “”They are young people; their names won’t tell you anything. I gave them the materials and explained the methods of working. The materials were worked on and introduced to us.”

JUDGE ACCEPTS LAWSUIT AGAINST NEWSPAPER DESPITE LACK OF EVIDENCE