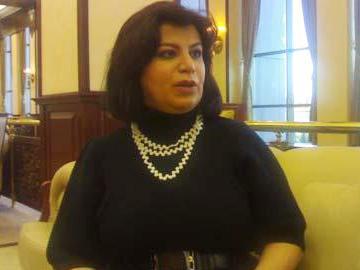 Today Baku Grave Crimes Court under judge Ramella Allahverdiyeva held a hearing on the case of Khural editor-in-chief Avaz Zeynalli.
Head of Azerbaijan Publishing Company Agabay Asgarov, a victim in the case, said that Khural newspaper had repeatedly published untrue information about him and this was the reason why he had appealed to Narimanov District Court. Asgarov stated that the court ruling demands the newspaper to apologize and to pay him 1000 AZN in compensation, but none of these demands had been fulfilled by the newspaper. In reply, Zeynalli showed the issue of Khural newspaper which contained the retraction, and also added that the compensation had been paid.

When MP Gular Ahmadova was called to testify as witness, Zeynallli objected to it, saying that it was a violation of the agreed-upon sequence of hearing witness and that he was not ready for this testimony. As the judge insisted on hearing the witness, lawyer Elchin Sadigov declared that he no more wanted to take part in the case and left the courtroom. At this point, an incident happened between Gular Ahmadova and Avaz Zeynalli. Ahmadova attacked Zeynalli who was behind bars, and TV broadcaster Ilgar Mikayiloglu had a dispute with Zeynalli’s brother.

After a brief, Gular Ahmadova testified and said that when Khural newspaper threatened to disclose shocking information about her, she met with Avaz Zeynalli, and offered him 10 000 AZN not to publish that information. Lawyer Mansum Bayramov filed a motion with the court asking to postpone the meeting as Zeynalli had health problems. The judge granted the motion and postponed the hearing for July 11th 11:00am.

Zeynalli was arrested following a lawsuit brought by MP Gular Ahmadova on October 28th. He was charged under Article 311.3.3 (taking a large bribe) and Article 311.3.4 (extortion), and then Nasimi District Court sentenced him to 3 months of pre-trial detention. On January 17th 2012 his prison term was extended by three months, and then by another month on April 12th.