Nardaran Case: Judicial Investigation Completed as Defendants Are Allowed to Participate in the Hearing 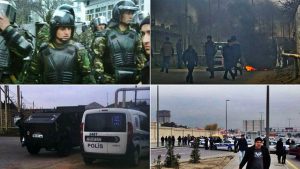 Another court hearing took place on the criminal case against Muslim Union Movement chairman Taleh Bagirzade and his co-defendants on 23 December. The hearing chaired by Judge Alovsat Abbasov started in Baku Grave Crimes Court without the participation of the defendants.

Lawyer Yalchin Imanov filed a repeat motion to ensure the defendants’ presence, remarking that it was the fifth time that the hearing was held in their absence. Defendant Shamil Abdulaliyev’s lawyer Zibeyda Sadigova defended the motion. However, the judge rejected the request.

Lawyer Yalchin Imanov filed a petition for the questioning of additional witnesses. “The case file contains incriminating statements provided by some individuals to the investigative agency against Taleh Bagirzade and the other defendants. Those individuals are Ramin Jafarov, Natig Karimov and Elnara Pashayeva. These persons’ statements are in the case file, but their names have not been included in the list of witnesses. They must come and be examined as additional witnesses,” the lawyer said. The public prosecutor asked for the petition to be denied. The petition was not sustained.

Imanov lodged another petition regarding interrogation of additional witnesses to investigate the reasons for the Justice Ministry’s refusal to register the Muslim Union Movement chaired by Taleh Bagirzade. The petition was not granted.

The lawyer further lodged a petition to examine the minutes of the taking of material evidence with the participation of his clients Taleh Bagirzade, Bahruz Asgarov, Agil Ismayilov, Ibrahim Khudaverdiyev and the attesting witnesses. The judge rejected this petition, as well.

Lawyer Yalchin Imanov then noted that although the motion to call and question Karim Alimardanov, who had led the Nardaran operation, was not granted in the present case, a similar motion for his interrogation had been sustained in another political case considered by the same court. Presiding judge Alovsat Abbasov said there is no such thing as a political case in court. The lawyer replied that if it weren’t true, Minister of Internal Affairs Ramil Usubov would have not commented on it. The lawyer reminded that they had been even threatened with disbarment by the Bar Association in connection with this case. “They told us that if we pulled out from this case we would be disbarred. The defendants have waived us, but we come and sit here in order not to be removed from the Bar Association,” the lawyer noted.

After that, Yalchin Imanov read out the defendants’ appeal to court.

“The fact that we have been excluded from the trial and are held in a cold and half-dark cellar is a torture on your part. Thus, you continue the tortures inflicted upon us by the Main Organised Crime Department (MOCD). As a result of keeping us in a cold cellar for hours time and again, ten of us have fallen seriously ill. The preservation of this situation means that you are no different from the torturers at MOCD in terms of morality. By doing so, you will go down in the history of Azerbaijan as a judge that not only issues politically-motivated verdicts, but also subjects to torture. Hence, you are falling in such a sin that, at least, you will receive your deserved punishment from the God,” the appeal read.

Lawyer Zibeyda Sadigova petitioned the court to question attesting witnesses Asif Aliyev and Emin Ahmadov as additional witnesses. She justified her motion by the contradiction between defendant Rasim Jabrayilov’s and victim Ibrahim Kazimov’s accounts during the cross-examination at the previous hearing. The lawyer quoted the victim as saying that defendant Rasim Jabrayilov had a weapon in his hand when he was detained. Therefore, the lawyer wanted the attesting witnesses, who were present there at the time, to be called and interrogated. The petition was denied.

Defendant Shamil Abdulaliyev’s lawyer Zibeyda Sadigova filed a repeat petition to permit her client to attend the ceremony of mourning for his late mother. This petition was also rejected. The judge justified the refusal by the fact that Shamil Abdulaliyev was charged with serious offences.

The judge asked for the parties’ opinions on the completion of the judicial investigation. The lawyers objected to the completion of the judicial investigation by saying that it had not been conducted properly and noted that they wanted to consult the defendants. A break was announced at the hearing. After the break, the defendants were allowed to participate in the hearing. Defendants Abbas Huseynov and Zakir Mustafayev refused to attend the hearing in protest against the court.

Taleh Bagirzade made a speech and said: “There is a booklet titled “Taleh Bagirzade’s Appeal” in the case file. Copies of this booklet were allegedly found in the pockets of those detained. I unequivocally say that this booklet was prepared after the Nardaran incident. Failure to investigate that booklet is tantamount to serving Ramil Usubov, but insulting Ilham Aliyev, because the booklet contains rude words about Ilham Aliyev. You know that I have always said my word point-blank. In all honesty, this booklet is not mine. I have nothing to do with this booklet and everything written in it on my behalf. MOCD, the agency which conducted the Nardaran operation, is subordinate to Ramil Usubov. This booklet has also been prepared by the group headed by him. Those words about Ilham Aliyev have also been written by them. Ramil Usubov himself is responsible for that booklet. I will make a separate appeal to Ilham Aliyev in that regard.”

Lawyer Yalchin Imanov lodged a repeat petition to summon and interrogate Azer Azimov, who had given the expert opinion on the booklet.

Defendant Fuad Gahramanli in his turn said that he was charged due to his writings, which therefore had to be investigated. “They must definitely be examined by an expert. How can you render the verdict without investigating them? Your name will go down in the history of Azerbaijan as a judge subjecting defendants to physical and psychological torture. You will put your signature under the most shameful trial ever,” Gahramanli said.

Defendant Shamil Abdulaliyev turned to the judge and said: “It is clear to everyone that you will pass your judgment according to the orders from above. Therefore, we do not expect a fair judgment from you. Just let us defend our rights and convey the truth to the public.”

The presiding judge rejected the petition. The judge announced the completion of the judicial investigation and the commencement of the courtroom speeches. The public prosecutor asked for time to prepare for his speech.