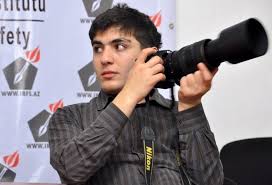 Mehman Huseynov, renowned blogger and newly elected Board Chair of the Institute for Reporters’ Freedom and Asafety (IRFS) was attacked by unknownassailants on 23 December in Baku.

According toHuseynov, he was followed by unknown men after leaving home. “Today, at around 3.10 pm I left home for barbershop. At the entrance of our neighbourhood, I saw a man in civilian clothes getting out of his car and following me. On my way to the bus stop, I stopped to see where that man would go. He noticed it and changed his way. I took a bus to the barbershop,” Huseynov said.

“The front door of the barbershop was transparent and I could see the outdoors. Looking in the mirror at the barbershop, I saw the same man on the street and I slightly panicked. I knew for sure that I had been followed from home to the barbershop. By the timeI left the barbershop, I had y informed my friends that something were apparently plotted against me. I had braced myself and knew what I was going to do. Upon leaving the barbershop and heading for the bus stop I noticed 3 or 4 men in civilian clothes at a distance of 50 metres. I began walking in a direction away from them. The same man walked towards me looking directly in my eyes. I was going straight along my way. That bandit-looking man approached me, hit me in the shoulder with his full force and grabbed my hand. Those behind him began heading towards us. I immediately escaped from the man and started to run. Seeing that I was running to a crowded place, they lost themselves and did not know what to do. By that time, I went out of sight among the neighbourhoods.”

Mehman Huseynov assessed the incident as a provocation against himself. “Yes, it was a provocation against me. Theplain-clother men wanted to either beat me up or plant drugs on me and frame me. Or, they expected that they would punch me and I would punch back, and thus, they would arrest me as a hooligan. I do not know who they were, whether they were policemen or some official had sent his bandits after me. But I know for sure that the government is behind every step taken against me and every threat facing me. The responsibility for this lies directly with the leadership of the country.”

“The pressure and attacks against me are related directly to my journalistic and blogging activities, because for years I have been unmasking and exposing this government, ministers, MPs and officials, and let people know who they really are. Recently, I have been investigating how those in power spend the money stolen from people, real estates and business networks of officials, and showed it to people,” Huseynov noted. “Most importantly, I have been recently elected the chairman of the Institute for Reporters’ Freedom and Safety (IRFS). This morning official documents were submitted to the Ministry of Justice. It seems, they are terrified and alarmed by my journalistic reports and displeased by my election as the head of IRFS, and decided to eliminate me. But it does not work. I am not going to turn a blind eye to the arbitrariness of officials, lawlessness and falsification. What I am doing is not a crime!”
Addressing the masterminds of the attacks against him, the youth blogger said the following. “I am not a criminal, nor a hooligan or drug addict. Do arrest me if you want. But when arresting me do this manly, not meanly. Phone me like a man and tell me ‘Mehman, we are arresting you, come and surrender’. I will come. But stop your illegal actions against me!”

Mehman Huseynov was detained in 2012 on charges of resisting the police, but was released after an interrogation. The Ministry of Internal Affairs issued a statement suggestingthat the blogger was detained in connection with the criminal case on the fact of resistance against the representative of authority during the protest rally of the Public Chamber opposition coalition. Mehman Huseynov himself related his arrest to his active coverage of events unwelcome for the government as an IRFS reporter during the Eurovision 2012 song contest held in Baku and his membership of the Sing for Democracy campaign. In connection with the said criminal case, Huseynov has been banned from leaving the country.

In October of 2013, a few days before the presidential election, the blogger was once again detained for creating a satirical video mash-up using the debate of presidential candidates and scenes from the movie 300 Spartans. He was freed after being questioned at the Prosecutor General’s Office for 6 hours.

On 28 October 2014, Mehman Huseynov was interrogated at the Prosecutor General’s Office following the inspections conducted at IRFS, which he currently chairs, by employees of the Prosecutor General’s Office on 8 August 2014. According to Huseynov, he was questioned about the activity of Sancaq Production, his brainchild, and the then chairman of IRFS, his brother Emin Huseynov who currently lives in exile. In November of the same year, the blogger was detained at Baku airport when leaving the country and was questioned at the Serious Crimes Investigation Department for several hours.

Nardaran Case: Judicial Investigation Completed as Defendants Are Allowed to Participate in the Hearing