Nardaran Trial: Court Grants Only One of Eleven Defence Motions, As Defendants Go On Hunger Strike 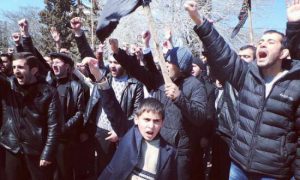 On 19 December, Baku Grave Crimes Court chaired by Judge Alovsat Abbasov continued the hearing on the criminal case of Muslim Union Movement Chairman Taleh Bagirzade and others in the absence of the defendants. The relatives of the accused did not attend the hearing, either. At today’s hearing, defence lawyers filed multiple motions.

Lawyer Nemat Karimli filed a petition to interrogate Minister of Internal Affairs Ramil Usubov in court. The petition stated that during his [televised] speech on the Nardaran incidents made on 2 December 2015, Minister Ramil Usubov said he had received the instruction [to conduct the operation in Nardaran] from President Ilham Aliyev; however, in reality during its Nardaran operation the Ministry of Internal Affairs (MIA) opened fire at peaceful people while they were worshipping. “MIA Press Service Head Sadig Gozalov’s statement reads that ‘The leadership of the Muslim Union Movement and the lawyers […] for attempting to forcibly change the constitutional system of the country and to overthrow a legitimate government by force of arms’. Since when are we accused of the incident in question? They have further written that ‘they will receive an adequate response’. The Ministry of Internal Affairs has already started suggesting that they will punish us. How does the Ministry of Internal Affairs know that the judges are going to sentence these people? It goes on to state that ‘During the operation, members of an organisation oriented toward radical religious extremism put up armed resistance to law enforcement officers, subjected them to gunfire and threw a grenade at them’. We are still halfway through the trial. It will only be known who fired at whom when the trial is completed. This is a clear violation of the presumption of innocence. We are therefore requesting that this document be added to the case file and Ramil Usubov be questioned as a witness,” the petition read.

“This is the only proceedings in the history of Azerbaijan’s judiciary, where the witnesses were taken away, tortured and pressured, and those who came to hearings were arrested. A Nardaran resident by name Fail Shahbazov was sentenced to 30-day administrative imprisonment for attending the hearings. And now, the Ministry of Internal Affairs has issued a statement alleging that this person had buried weapons somewhere. A criminal case has been launched against him on charges related to firearms. The law enforcement agencies have repeatedly made statements influencing the course of this trial. That is why, we want Minister of Internal Affairs Ramil Usubov to be summoned and interrogated,” Yalchin Imanov said. Public prosecutor Nasib Bayramov asked for the motion to be denied, and, the motion was not granted.

Lawyer Yalchin Imanov noted that attesting witnesses Intigam Karimov and Huseynaga Mammadov had participated in several other cases in the same role. He stressed that Intigam Karimov had also been involved as an attesting witness in the criminal case of youth activist Bayram Mammadov, who had recently been sentenced to 10 years in jail. The lawyer then presented the response to his inquiry confirming that Karimov was registered at the narcological dispensary. Imanov further noted that those two attesting witnesses had their signatures on the minutes of the taking of material evidence during the Nardaran incident, and therefore asked the court to remove the minutes from the list of evidence. The motion was not sustained.

Lawyers Yalchin Imanov, Fariz Namazli, Nemat Karimli, Fakhraddin Mehdiyev, Zibeyda Sadigova and Gulshan Salmanova filed a request to interrogate the eight attesting witnesses, who were present during the special operation in Nardaran, as additional witnesses. Public prosecutor Nasib Bayramov asked for the motion to be denied. The motion was rejected.

After that, the court was requested to summon the expert, who had issued the opinion on Taleh Bagirzade’s appeal booklet, for testimony. Lawyer Yalchin Imanov justified the request by the fact that Taleh Bagirzade dissociated himself with that booklet and the booklet contained primitive errors. The motion was denied.

The lawyer then told the court that the Hospital named after Arif Heydarov had failed to respond to his request to provide excerpts from the medical records of Farail and Abulfaz Bunyatov, so he asked the court to file this request for them. The petition was rejected.

Lawyer Yalchin Imanov said the criminal case against defendant Fuad Gahramanli had been launched based on the statement of Eldar Sultanov, the head of the press service of the Prosecutor General’s Office, and asked the court to question Sultanov as an additional witness in the case. The public prosecutor asked for the dismissal of the motion. The motion was denied.

Attesting Witness Turns Out To Be Drug Addict