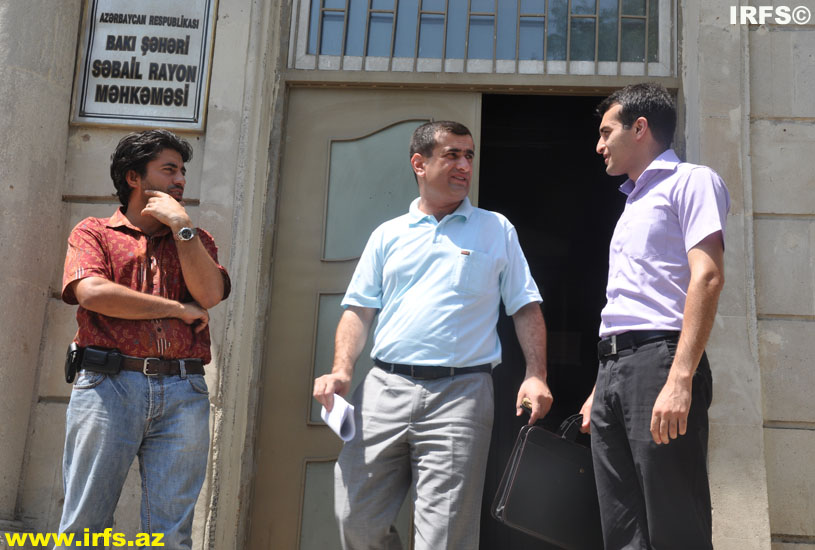 Today, 5 August, a hearing was held on the lawsuit of TV and Alternative Media Development Centre Public Union founder Rasul Jafarov and Muhakime newspaper’s Editor-in-chief Yashar Agazade against the National TV and Radio

Council (NTRC) in the Sabail District Court, under the chairmanship of Judge Kemale Amirkhanova. The plaintiffs were present, but a representative on behalf of the defendant did not participate in the hearing.

At the beginning of the hearing the representatives of the Institute for Reporters’ Freedom and Safety presented a written appeal to the judge to have permission to film the hearing. However, the judge refused to grant permission without consulting anyone. Yashar Agazade objected to this refusal stating that the judge should have asked for the opinions of both sides in order to substantiate his refusal. Agazade stressed that they, the plantiffs, do not object to the video-recording because this hearing is in public interest. However, the judge stood by his refusal and said that if the hearing were filmed, it would create a negative public opinion.

It should be noted that in accordance with article 176.5 of the Azerbaijan Republic Civil Procedural Code, in open cases and hearings, people have the right to take notes in the written form during proceedings from their seat. People may use a computer after they receive permission from the judge. Permission to record audio and film and to take photos and video, including live broadcasts (and mobile communication) is given after the opinions of people participating in the hearing are considered and after the judge had given permission. However, these actions should not interfere with the normal proceedings of the hearing and may be restricted to time.

Rasul Jafarov presented the official document showing that the NTRC had received a notification letter regarding the hearing.

The judge stated that they will give a warning to the NTRC by telephone.

The judge said that the case will be considered next time even if the defendant does not participate and scheduled the next hearing for 16 August, at 2:30 p.m.

TV and Alternative Media Development Centre Public Union founder Rasul Jafarov and Muhakime newspaper’s Editor-in-chief Yashar Agazade appealed to the NTRC in order to get a license to broadcast radio programs on a frequency used in Baku and the Absheron peninsula. NTRC told them that there were many free frequencies; however the organization refused to assign them an official frequency or grant them a license. The plaintiffs filed an appeal against the NTRC and asked the courts to deem the act of the government entity illegal and to force the NTRC to give them license.