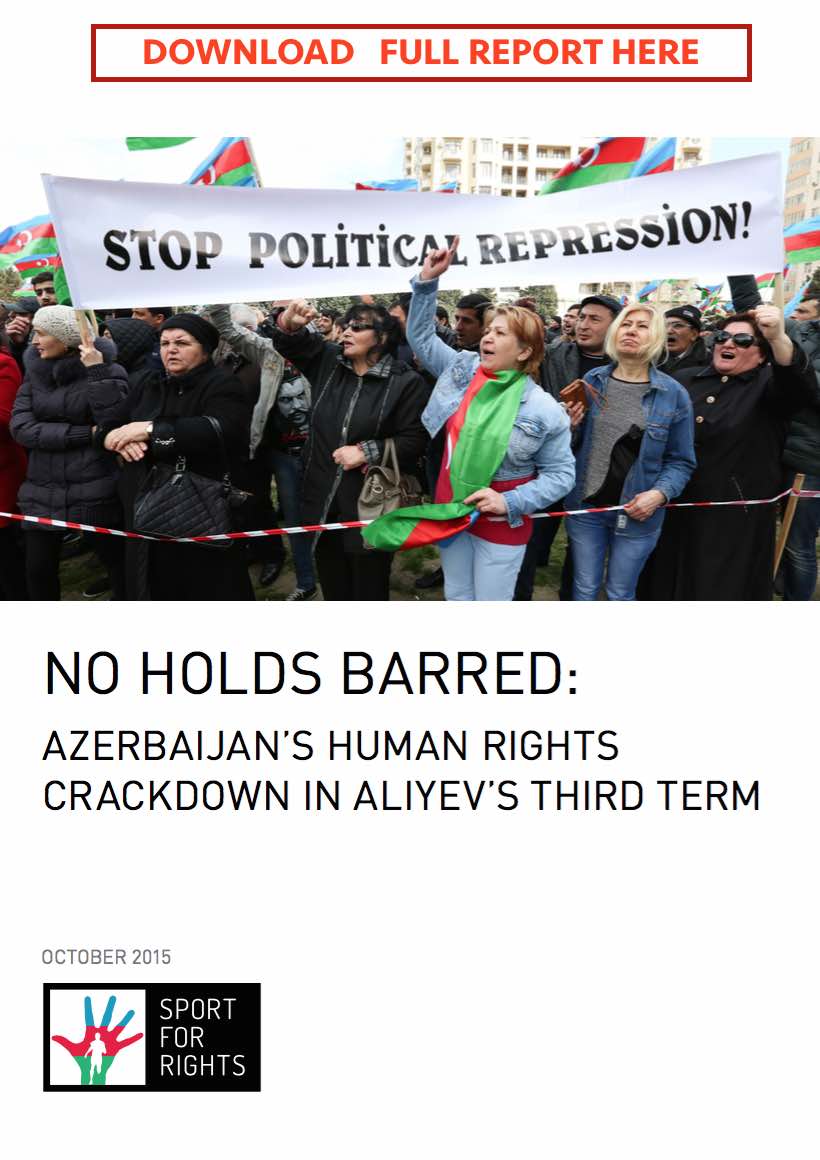 With just four days left until Azerbaijan’s parliamentary elections, the Sport for Rights campaign has launched a new report examining the unprecedented human rights crackdown taking place in the country. Starting with the re-election of President Ilham Aliyev to a third term in office in October 2013, the Azerbaijani regime has worked increasingly aggressively to silence its critics over the past two years.

“Since Aliyev was inaugurated into his third term, the Azerbaijani regime has been carrying out an elaborate witch hunt against its critics. This suffocation of civil society, and the regime’s increasingly hardline attitude towards independent media – culminating in the imprisonment of investigative journalist Khadija Ismayilova and the murder of Institute for Reporters’ Freedom and Safety Chairman Rasim Aliyev – has been widely condemned by Azerbaijan’s international partners, who now go beyond traditional statements of concern. Without doubt, this clampdown is hurting Azerbaijani society and damaging Azerbaijan’s international standing”. said Gulnara Akhundova, Programme Manager at International Media Support.

Sport for Rights’ report, titled No holds barred: Azerbaijan’s human rights crackdown in Aliyev’s third term, is divided into two parts. The first part takes an institution-by-institution look at Azerbaijan’s deteriorating international relations. The second part details the state of fundamental freedoms in the country on the eve of the parliamentary elections.

“On 1 November, Azerbaijani citizens will exercise their right to vote, but at a time when fundamental freedoms are so severely and purposefully undermined, this electoral process cannot be seen as anything more than a charade. Ensuring freedom of expression is particularly important during election periods, in order to ensure the population has access to sufficient information to make an informed choice. Yet the Azerbaijani electorate has been systematically stripped of alternative viewpoints. With the arrests, show trials, and imprisonment of human rights defenders and journalists, the Azerbaijani authorities have effectively criminalised critical expression. In such circumstances, no elections can be considered free and fair”, said Thomas Hughes, Executive Director of ARTICLE 19.

Notably, the report highlights the correlation between key developments at international institutions and acts of repression on the ground. The report also points to the mixed signals being sent by international bodies that condemn the human rights violations taking place in Azerbaijan, yet at the same time welcome the ruling regime with open arms.

No holds barred also contains a series of recommendations to the Azerbaijani authorities and the international community on steps needed to improve the human rights situation in the country – starting with the immediate and unconditional release of political prisoners.

·      Sport for Rights is a coalition of international organisations working to highlight human rights concerns in Azerbaijan in the context of sporting events such as the Baku 2015 European Games and the forthcoming Baku 2016 Baku European Grand Prix.

·      For more information on the report, the campaign, or the human rights situation in Azerbaijan, please check out Sport for Rights’ Facebook page and Twitter feed , or contact the campaign at info@sportforrights.org