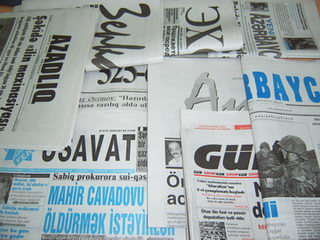 There are problems associated with delivering periodicals to Azerbaijan’s autonomous exclave Nakhchivan. The Institute for Reporters' Freedom and Safety was told this by Jasur Mammadov, who is engaged in the private distribution of newspapers.  According to Mammadov, the newspapers, which are supposed to be delivered daily via the Baku-Nakhchivan flight at 8:00 a.m., they are delivered via second or third flights because of interference from “AZAL” State Concerns.
“The second flight arrives in Nakhchivan at 3:30 p.m., and third trip plane arrives at midnight,” said J. Mammadov. “Therefore the newspapers are not delivered on time. The newspapers delivered via the third flight go on sale a day later and then they are considered old. This negatively affects sales.”
IRFS Nakhchivan regional correspondent Elman Abbasov said that the late delivery of newspapers to Nakhchivan is observed more often and emphasized that the readers are able to obtain newspapers one day after they are published.
In connection with this issue, “Baki Khabar”, “Azadlig” and “Yeni Musavat” newspapers told IRFS that they are aware of the late delivery of newspapers to Nakhchivan, but don’t know the reason for this.
When talking to IRFS, “AZAL” State Concerns Press Service Head Maharram Safarli denied the facts and said that such a thing never happened.
“No obstacle on behalf of AZAL is created in delivering newspapers to Nakhchivan,” said Safgarli. “The problem might be linked to the number of passengers. However, the State Concerns is not to blame in this case.”
Previous Post