No progress in Idrak Abbasov investigation 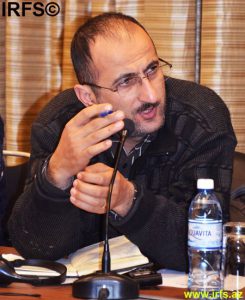 On November 6th Baku Appellate Court, in a closed hearing, denied the journalist Idrak Abbasov’s appeal against October 11 decision of Sabail district court, which had denied his lawsuit filed over nonfeasance of investigation into his beating case. Judge Hasan Ahmadov presided over the hearing.

Idrak Abbasov told the IRFS that investigations into the attack had produced no new developments since April 2012. Abbasov said that he had requested the court to assign a duty on the investigative agency to continue the investigation and inform the complainant of progress.

“ At today’s hearing the representatives of the Ministry of Interior said the investigation has not been suspended, it is in progress. I filed a motion asking that they provide me of that progress. However the court did not take it into consideration and denied my appeal” said the journalist.

IRFS intends to monitor this case closely to see that the perpetrators, whom ever they may be, are brought to justice for the crime that they committed.

Background: Idrak Abbasov was attacked by SOCAR security officers on April 18th 2012 in the village of Sulutepe, while he was filming a housing demolition and the confrontation between SOCAR employees and local residents, who were accused of illegal capture of SOCAR territories. The journalist was wearing a Press Jacket when he was assaulted. Abbasov was brutally beaten and sustained broken ribs, injuries to his eyes and kidney and head trauma.

Five and half year prison sentence requested for arrested journalist