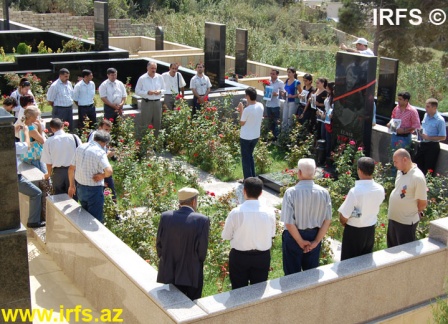 Today (8 September) a group of Azerbaijani journalists visited the graves of slain “Monitor” Magazine Editor-in-chief Elmar Huseynov, and one of founders of contemporary Azerbaijani media Najaf Najafov at Fakhri Khiyaban #2 in connection with the International Journalists’ Solidarity Day.

“Turan” Information Agency Director Mehman Aliyev noted that the journalists were celebrating another holiday in the cemetery and called on Azeri journalists to unite in the fight for speech freedom. “In the real sense of word, Azeri journalists need solidarity and unity in the fight for freedom of speech. When late Elmar was murdered, the media, NGO and political party leaders were here. However, those people who stood on the front row back then, are not present now.”

Well-known journalist, “Azadlig” Newspaper editor Rovshan Hajiyev regretted that Elmar Huseynov’s murderers and the ones behind his murder have not been found or prosecuted. “We also have the responsibility, along with law-enforcement organs to achieve this. We must unite to help in uncovering this murder,” he said.

Another journalist, Idrak Abbasov called his colleagues to be optimistic, and, pointing to young journalists that were participating in the event, said that there are people who fight for freedom of speech in Azerbaijan.

The ceremony was led by the Institute for reporters’ Freedom and Safety Chairman Emin Huseynov. Huseynov said that he invited all mass media and press related NGO leaders to the event, and added that despite this, he could not see anyone of NGO leaders among the event participants. However, Emin Huseynov noted that people loyal to freedom of speech were gathered at the event. He introduced one lady, who came all the way from Azerbaijan’s Kurdamir region to join the event, and called on some newspaper editors and NGO leaders to learn a lesson from this lady.

That lady, Latafet Malikova, said that she grew up in a journalist family and she understands that journalism is a decent profession. God bless the deceased journalists, she said. The lady also called on the journalists to be optimistic, and emphasized that they are on the right path.

“Mukhalifat” Newspaper Editor-in-Chief Rovshan Kabirli’s speech was in character of taking an oath to continue the fight for speech and press freedom. “We –Yashar Agazade and I are newly returned from prison. We are continuing our fight in the same spirit we did before our arrest; it will be the same from now on – until our last breath.”
The event started at 2:00 pm and ended at 3:00 without any incident.

MUSHFIG HUSEYNOV VISITED BY HIS PARENTS