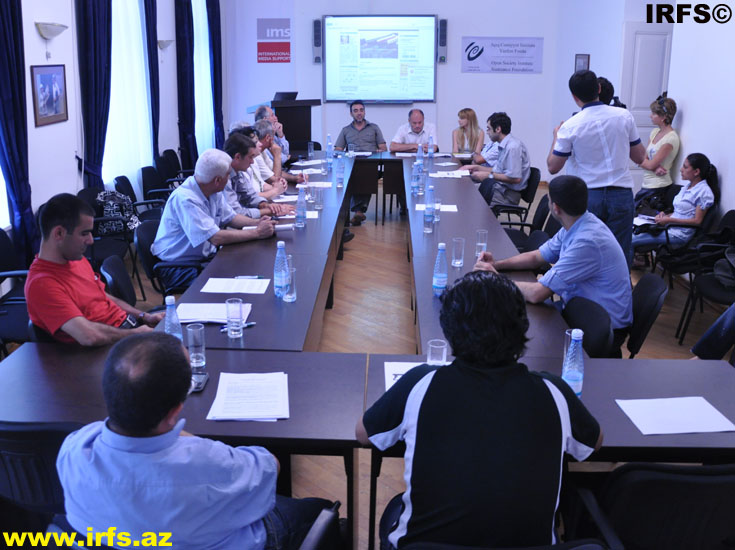 Today, July 20th, on the eve of the 135 year anniversary of Azerbaijani media, the Open Society Institute Assistance Foundation: Azerbaijan held a presentation ceremony at the Media Center for the finding of projects implemented in 2009 within the framework of Freedom of Speech.

The program coordinator, Rovshan Bagirov, said that as of 2002, the Open Society Institute Assistance Foundation has been financing initiatives related to mass media, freedom of speech, professionalism, regional press and new media.

“The Open Society Institute Assistance Foundation has done a lot in supporting freedom of speech in Azerbaijan,” said Rovshan Bagirov. “The fund financed different projects including projects supporting persecuted journalists, the creation of internet based libraries, the freedom to obtain information, the development of new internet media and the freedom of expression.”

According to Bagirov, the institute has financed projects within the freedom of speech framework in the amount of 1.179 million USD since 2002. In 2009, 140 thousand USD were allocated to support media grant projects.

Media Rights Institute director Rashid Hajili and program coordinator Khalid Agaliyev gave information regarding the situation of the media in the first six months of 2010.

Even though, OSI executive director Farda Asadov congratulated journalists for the anniversary, journalists did not feel like celebrating. Azerbaijan was declared a non-free country by international human rights organizations.The Institute for Reporters’ Freedom and Safety chairman Emin Huseynov said that some projects financed by the OSI are not implemented effectively to serve the media sector.

Bagirov stated that the www.economy.az website supervisor was ill and therefore had not been able to do the work effectively. “We gave him more time to implement the needed work,” said Bagirov. “Today the project coordinator is leaving the hospital, and he will be able to do the necessary work.”

The Azerbaijan Media Center operates with the financial support of the OSI, and Huseynov questioned the center's director Gulnare Akhundova. .

“On 1 June, during the 65th session of the European Broadcasting Union General Assembly which was held in Baku, you claimed that more than 300 daily and 800 weekly newspapers were being distributed in Azerbaijan, and three foreign radio stations were operating in Azerbaijan. In addition, you showed Azadlig and Yeni Musavat newspapers as examples emphsaizing, ‘no one can say there isn't freedom of speech in Azerbaijan.’ Once again, I am asking you if you really think that's true?” Huseynov asked.

The IRFS chairman continued by telling Akhundova that her speech puzzled a lot of foreign guests. Huseynov noted that the OSCE former representative on the freedom of media, Micklos Haraszti, who spoke right after Akhundova, said that her claims regarding foreign radio stations were inaccurate.

Akhundova said that she obtained the information from the website of the National TV and Radio Council and the Press Council, and was referring to this information when she spoke. She stressed that she did not see any need to use alternative statistics. “The EBU told me that I could rely on the information given from the state agaencies,” noted Akhundova. “I told Micklos Haraszti before the event that I would 'advocate for the evil' here no matter what he says.”

In response to this, Emin Huseynov said, “As the leader of a media organ you should advocate for journalists, not for the evil.”

VOA: NO FREE PRESS IN AZERBAIJAN