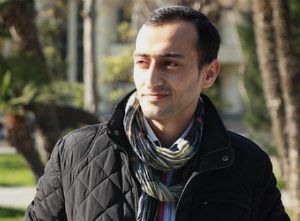 On 16 January, the Baku Court of Appeal considered the appeal against the extension of the pre-trial detention period of youth activist Fuad Ahmadli until 12 March. According to lawyer Asabali Mustafayev, the appeal was not granted.

The lawyer said keeping his client in custody was unlawful, as Fuad Ahmadli had health problems that were impossible to treat in the detention centre.

Asabali Mustafayev added that he would submit a complaint to the European Court of Human Rights.

Background: Fuad Ahmadli was detained on 18 August 2016. He is charged under Articles 302.1 (infringement of the legislation on operative-search activity) and 308.1 (abusing official powers) of the Criminal Code. According to the indictment, Fuad Ahmadli, an operator at the Call Centre of Azerfon LLC, channelled personal information of subscribers to certain people. The indictment mentions him as a supporter of Fetullah Gulen, the leader of a terrorist organisation. The indictment further reads that, religious literature and CDs prohibited by law, speeches of Fetullah Gulen, and documents on his mutual relations with so-called “Hizmet (Service) imams” were seized from his apartment during the search.