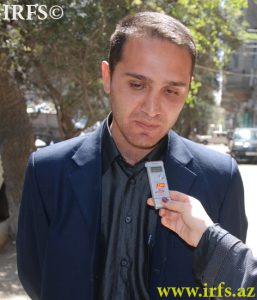 On 17 January, the Supreme Court heard a protest filed in journalist Elchin Hasanov’s case by the prosecutor’s office against what the latter believes is getting away with a lighter sentence.

According to Elchin Hasanov, the Supreme Court upheld Nizami District Court’s decision of 1 June 2016 sentencing him to one year of corrective labour. He said, however, that the risk of getting arrested has not gone away. “The reason for it can be ‘failure to comply with the judgment’. I must pay 20 per cent of my income, but I am unemployed. Unless I find a job by February, I can be imprisoned for one year,” the journalist said.

Background: The criminal case against journalist Elchin Hasanov was launched in February of 2015 due to an incident between him and head of Asia news agency Jafar Jafarov. On 1 June 2016, the court sentenced Elchin Hasanov to one year of corrective labour. The prosecutor’s office filed a protest against this judgment, requesting that the original charge brought against Hasanov be re-classified to a graver one under Article 221.3 (hooliganism, committed using a firearm) of the Criminal Code and his sentence be increased up to 3.5 years in jail. However, the Court of Appeal upheld the judgment of the court of first instance.

Elchin Hasanov is the deputy editor of Yuksalish Namina (For Progress) online newspaper based in Sumgait. He is also a member of the Supreme Assembly of Azerbaijan Popular Front Party and deputy chairman of the Public Association of Legal Education of Sumgait Youth.